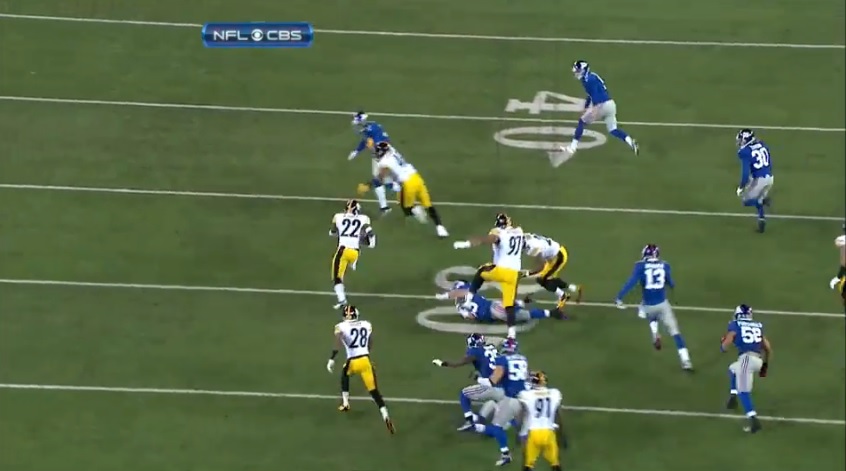 First, let us know how is CFL going – is the goal to get back to the NFL?

Yeah, I’m trying to get back to the NFL. I’m hoping for one more time in the NFL. If not, I can make a career up here.  Heck, the crime rate is only 5% up here so I’d be safer at least!

How has the CFL helped your career?

Well it’s given me more film to show other teams. I only had one year of film to show from the NFL. So that definitely helps. They can see I’m still a playmaker, doing what I’ve done all my life. And it definitely should help people who claim I’m a troublemaker see that I’ve never had problems here and to prove that I’m not a problem for anyone.

I noticed you seem to be more and more involved in the passing game in the CFL – think that helps with potential role in NFL?

I would definitely like to play the slot receiver role in the NFL. If teams want me to change to receiver I don’t mind doing that. I’m still getting people saying I’m too small to play running back. I’ve been hearing that all of my life. I’m still proving that I can.

What was the hardest adjustment to CFL – any concern that the CFL game will make a return to NFL tougher?

The field is too big! I can catch the ball on a kick return on the goal line and run one-hundred yards and still have twenty yards to go! You’re running and thinking how tired you are. It’s ridiculous how big it is.

So, I stay in good shape – I play basketball every week and lift weights every day to keep my body right. It’s like track. You train by running long distances to be a short distance runner. It’s like that if I go back to the NFL.

The hardest adjustment may be the no fair-catch rule. There’s no fair catch in the CFL. So you can’t just get greedy if I get back to the NFL. You have to be smart about it.

Stepping back – let’s talk about being drafted by Steelers. Were you surprised? How did you find out?

Not really. Two teams I figured had interest in me and those were the ones with the Pouncey brothers. I figured I’d play with one of them. I played with them all of my life.

I spoke to your high school coach Bill Castle years go about you and he said the key is to get you in space and that you’d excel as a 3rd down back – and that you play with great heart. Any thoughts on that?

I didn’t know he said that! I think I have sure hands – I’m a running back with wide receiver hands. I can be a legit receiver and will play anything. I just want to win. I’ve won championships – I’m used to winning them all of my life. I just want to be number one in everything I do.

But playing slot wide receiver now – that would be my preference.

Who helped mentor you in Pittsburgh, and how?

James Harrison and Heath Miller. James used to lift three times a day – that was too much for me. I did everything Heath did. Hard work – I worked hard all of my life.

Did anything specific help you most?

No. I knew what it took to win. I’ve been playing football all of my life. From high school to college and had good coaches. I spoke to Antonio Brown – he’d tell me what it was like when he was a rookie. I just followed what he did.

What was the hardest adjustment for you?

Managing money. I was young at the time and would go to the casino two times a week. Staying there doing that would be trouble – Coach Tomlin told me that it would be trouble. He told me he didn’t want me to end up like a friend of his that got into gambling trouble. He said he knew I was a grown man but wanted to help me and tell me that.

How hard was being released by the team for you?

I didn’t talk to them after I was released about it. I went back to the pro day at my college and saw them and shook hands with them – it was all good. It was just the situation at the time. I knew what they were doing – what they felt they had to do. But they still talk with me. I wouldn’t mind going back!

Any funny stories of your time in Pittsburgh?

It was mostly the old heads in Pittsburgh then.  We didn’t see them much after practice or games.

The one thing that wasn’t fun was as a rookie having to get the vets breakfast. We just had two running backs as rookies so I had to keep buying them breakfasts – and they weren’t eating them. I was like, what the heck. It was bullcrap, so I stopped buying it. Isaac Redman got mad at me and wanted to fight me. But I told him I’m not buying it if they’re not eating it. I wasn’t wasting money on him I said. He’s my dog, but I was standing my ground.

Come in and work hard as heck. Outwork the vet. Be quiet and do the job and all will come into place. Don’t talk about nothing and do your job. And do as much as possible. It will always help.

Any last thoughts for readers?

I just got inducted into my high school’s Hall of Fame. So that was nice. It was something I wanted since I was young. We’ll see if college is next!

I just want people to know me and see how soft-hearted I really am. I work hard day in and day out, I’m a good guy who always has a smile on his face. I’m a good father and I’m still getting better and becoming a man. It’d be good if I can get back to the NFL. But if not, I can still make a career for myself up here.