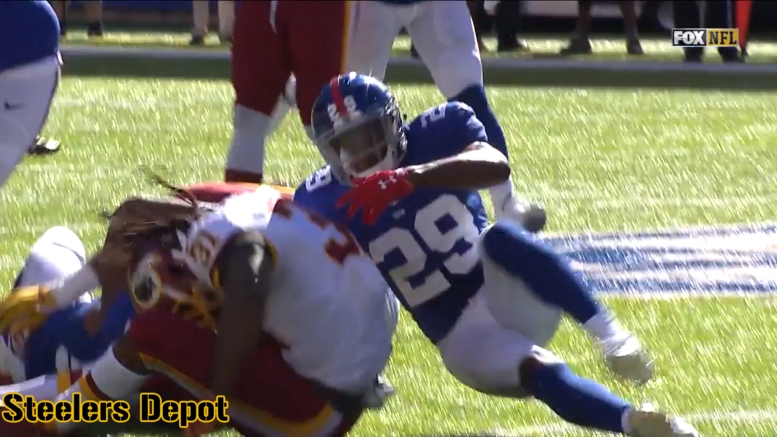 I think it would be disingenuous at best to suggest that the Pittsburgh Steelers’ decision to reach an agreement on a one-year contract with free agent safety Nat Berhe was based much on anything outside of his ability to contribute on special teams.

For a player with only a couple hundred defensive snaps to his name over the span of a four-year career, it would be folly to make that personnel decisions without heavily factoring in what he can do in other areas of the game, after all.

But that does not mean he could not potentially be something who is a contributor on the defensive side of the ball. In fact, while the New York Giants were not exactly brimming with success a year ago, the beat writers by midseason were questioning why he was not being used more frequently on a defense in need of some splash.

He only played 41 snaps on defense last year, but almost all of that came in the first half of the season. From Week Four to Week Seven (leading up to the Giants’ bye week), for example, he played 29 snaps over a four-game span. He only played another nine snaps over the course of the final nine games.

And that included six snaps in the first game outside of the bye week, a blowout loss to the Los Angeles Rams that had those on the Giants’ beat questioning, among many other things, why defensive coordinator Steve Spagnuolo was not using the fourth-year veteran more.

Pat Leonard wrote back in November for the New York Daily News that the team’s decision to play Berhe only six snaps in that game was “just another example of coach Ben McAdoo’s head-scratching non-adjustments coming out of the bye”, unable to come up with an explanation for “Berhe staying on the sidelines as the defense flailed — despite the Giants being terribly shorthanded at linebacker and in need of variety and playmakers”.

As Leonard noted, Berhe was often used during the second quarter of the Giants’ season as a deep sub-package player, in the dime defense or even as a seventh defensive back, often playing a safety-linebacker hybrid role, which has become a desired commodity in today’s game. It’s something that he also saw time doing in college.

For his part, Berhe said that he liked playing closer to the line of scrimmage, often even being used as a quarterback spy, which was the role he served against the Seattle Seahawks when he recorded a sack on Russell Wilson.

I’m not saying the Steelers are going to or are planning on using him as a sub-package player. At least as the depth chart currently stands, J.J. Wilcox would be more likely to get on the field first. But some of the writers of the team he left found themselves at one point last season questioning why he wasn’t playing more, before his playing time pretty much evaporated. I think that’s worth noting.