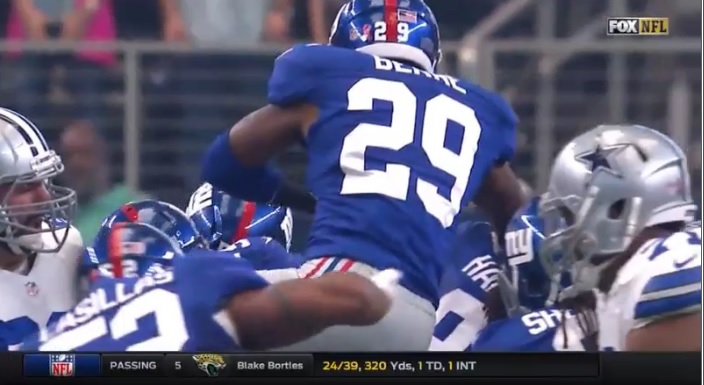 When the clock strikes midnight, Nat Berhe won’t be getting back into his pumpkin. He’ll be crushing running backs like them instead. His nickname is “the missile” and after watching some of his work on defense over the past two years, it’s a tagline that definitely fits. If nothing else, Berhe is a big hitter and consistent tackler. After looking at the key special teams value he brings to the team yesterday, we’ll switch gears and see what he brings defensively.

That’s where Berhe makes his money. He’s a ferocious hitter who plays much larger than his 5’10, 193 pound frame, filling the alley with ease and authority and having no problems bringing down players significantly bigger than him. You can find that pretty much anywhere.

Watch him set the tone early against the Dallas Cowboys in 2016. Throws his body into the pile to knock down Zeke Elliott.

Or how about this hit on Matt Jones? Meets him in the alley, big hit (yes, one that’s probably now illegal), and forces the fumble.

He’s not a sloppy tackler either. It’s controlled for his vicious playing style. Probably comes from the special teams focus. Can’t miss there or you won’t last long on that unit.

Fairly limited. You’re not going to see many impact plays from him. Hard to even find a true breakup on his tape. Sort of had one against Washington in 2017, meeting Desean Jackson on a skinny post, but the pass was still thrown out in front and incomplete.

Does lack long speed and can get beat vertically by speedy wideouts. Here’s Bryce Treggs, who ran a 4.39 at his Pro Day (so probably a 4.44 guy in reality) burn him downfield for a monster gain in 2016. Berhe, again, has the ability to make the tackle and not let that great play turn into a touchdown, something that didn’t happen often enough in the Steelers’ secondary last year. And Mike Tomlin made that point very clear, ultimately to no avail.

Berhe barely played on defense last season after the team drafted Darian Thompson. 40 snaps total, 13 of which came in Week 6 against Denver. He did get some time when the Giants went into their dime-heavy defense with 7 DBs on the field. Saw it several times against the Seattle Seahawks where – like we highlighted with Morgan Burnett – Berhe was used as a spy on Russell Wilson. Where he picked up the only sack of his career.

It’s certainly fair to consider him a strong safety but he’s done a mix of everything. Most coverage was in the deep half, Cover 2 shell, but he’s logged time in the box and as the single high deep safety.

Couple of blitzes mixed in too though he hasn’t been super effective at them. He knows how to hit and finish when given the opportunity though, should the scheme free him up.

Saw much more work in 2016, starting the Year and then bouncing in and out of the lineup the rest of the way.

I think of Berhe what Shamarko Thomas was supposed to be. That big hitter, strong safety type, who, if a backup, can make an impact on special teams with those same traits.

Obviously, Berhe isn’t going to start in 2017. And I don’t want him playing over an extended period of time. His lack of speed, coverage ability, and too few splash plays isn’t going to gel with the position. And this signing doesn’t prevent the Steelers at all from drafting a rookie high. They still need to.

Similar to Tyler Matakevich, if Berhe is your #4 safety, you’re doing well enough. Has short-term defensive value and what he does well, he does really well.