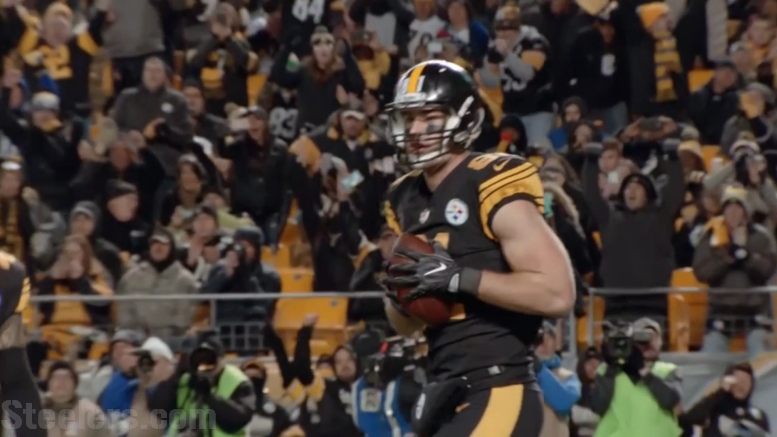 Is it conceivable that Jesse James does not make the 53-man roster? I think it is, even if remote. So let’s just get that out of the way. Put simply, if the Steelers use a high draft pick on a tight end, paired with Vance McDonald, James’ nearly $2 million base salary suddenly doesn’t look so great as, at best, a number three tight end in comparison to Xavier Grimble or Jake McGee.

Given the necessarily variable circumstances over a rookie, and McDonald’s uncertainty in terms of health and proven production, I would think this circumstance is pretty unlikely. But I’m quite confident that he is going to spend less time on the field this year, perhaps by a good margin, than he has the past two years.

James is obviously very well-liked in Pittsburgh and those who like him know why that is. Area native, Penn State product, cool nickname, underdog story, toughness, some spots of clutch catches, even a couple of highlight blocks. All these things rightfully win over a fan base like the Steelers’.

I do think that most have come to the conclusion that he is pretty close to tapped out, however, when it comes to his ceiling, and have settled on the reality that McDonald will be the top tight end as long as he is healthy. $2 milllion isn’t a substantial sum for a number two guy, but it might be a bit of a stretch as a number three for a cap-strapped team.

The Steelers could technically release him and re-sign him on a cheaper deal, however. Not that any of this is likely to happen. Even though the team shows a lot of interest in the position, when it comes to draft time they struggle to pull the trigger, so I find that for this question to even come up is likely.

Will he spend the majority of the season as the team’s top tight end this year though? No, I don’t think so. And the team should be better for it. James is better served in a complementary role.