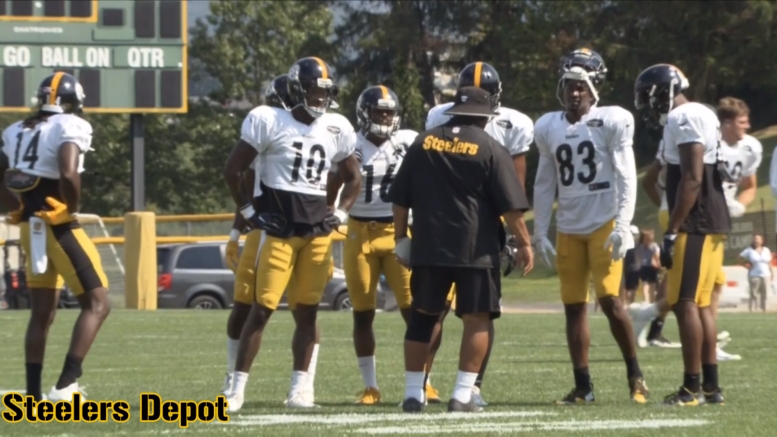 Darryl Drake may have barely even gotten on to the practice field with his players—actually, he hasn’t even done that yet since it’s not allowed in Phase One of the offseason program—but consider me optimistic about his ability to get the most out of his group as the wide receivers coach for the Pittsburgh Steelers.

Drake, coming over from the Arizona Cardinals after they dumped the majority of their coaching staff or gave their coaches the opportunity to seek other jobs, was brought in early this offseason following the retirement of Richard Mann. Mann was hired by Mike Tomlin in 2013 and coached the group for the past five years.

Mann was among the most veteran position coaches in the NFL. An Aliquippa native, he coached up to his 70th birthday (he turns 71 tomorrow, in fact). Beginning his coaching career at Arizona State in 1974, he made the jump to the NFL in 1982 and (almost) never looked back.

The only lapse in his resume that exists concerns the timespan just before joining the Steelers. Mann was the wide receivers coach with the Tampa Bay Buccaneers from 2002 to 2009 in a time that overlapped when Tomlin was their defensive backs coach, but he was out of the business from 2010 to 2012, presumably retired, until his old coaching buddy called him up.

Tomlin is not the only one who holds a great deal of respect for Mann, however. Another one of his admirers is the man who is trying to fill his shoes.

“I think Richard Mann, who’s been a godfather to me, has done a tremendous job with those guys”, Drake said of the work his predecessor did with the Steelers’ wide receivers over the past five seasons. “They’re very well-coached. You see it on film. And then when the opportunities come to make plays, they make them”.

Heading that list is Antonio Brown, who made the All-Pro list, including first-team for the past four seasons, in every year under Mann’s tutelage. Emmanuel Sanders also had his best season in Pittsburgh (also his last) during the coach’s first year on the job. Jerricho Cotchery had something of a career year at the time as well.

Though he was contemplating retirement for a couple of seasons already, Mann kept kicking around looking for another Super Bowl ring (winning one during his first season with the Buccaneers). He ends his legacy with the Steelers helping to get JuJu Smith-Schuster off on the right foot.

During his first interview since joining Pittsburgh, Drake said that he likes to keep tabs on who is regarded as the best wide receiver group in the league at any given time. He told the team’s website that the Steelers have long been at or near the top of that list. Mann definitely has played a role in that accolade.