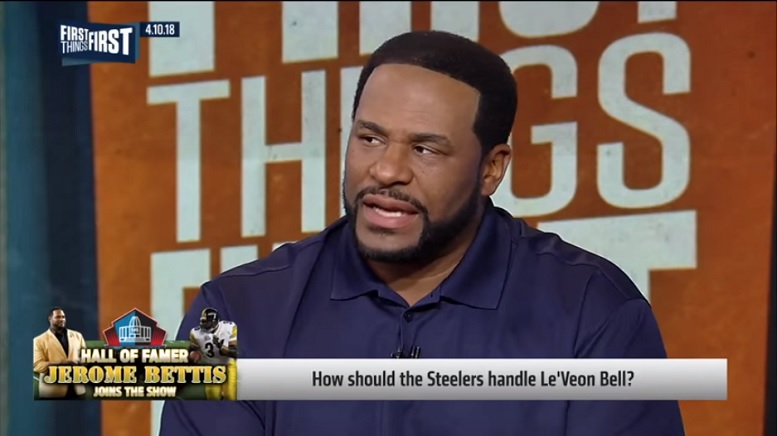 A few weeks ago, Pittsburgh Steelers running back Le’Veon Bell caused a stir thanks to a tweet of his. “It’s so hard to be a hero in a city that tries to paint you out to be a villain,” tweeted Bell.

Was that tweet directed at the Steelers fan base, the local media, the national media, or all three? During a recent interview on First Things First, former Steelers running back and Hall of Famer Jerome Bettis gave his thoughts on who he believes Bell’s tweet was directed at.

“I don’t know if it’s quite the fan base that he was kind of directing that to,” Bettis started to explain. “I think he was more directing that to the media in Pittsburgh because I believe his concern is that they’re painting that brush to make him look like he’s greedy and that he doesn’t necessarily deserve what he’s asking for. And so now what’s being pushed out in the local media.”

Later during his interview, Bettis was asked to give his thoughts on Steelers head coach Mike Tomlin and his policy with his players regarding social media.

“Well, Mike Tomlin, he allows a lot more leeway than other coaches in certain areas,” Bettis said. “So, you know, he’s not that hard on them from a social media standpoint where other organizations are going to say, ‘hey, we want everything to be silent, we don’t want anything to come out from the locker room.’ Coach Tomlin doesn’t necessarily have those major concerns. His concern is you being where you’re supposed to be, how you conduct yourself on and off the football field. Those are the issues that are really, really near and dear to him. So I think from a social media standpoint, they have a laxed a policy.”

Bettis had one final thought on what Bell tweeted a few weeks ago.

“It’s just a matter of him not wanting to be looked upon as that greedy, selfish player that happens sometimes,” Bettis said.

In the end, Bettis believes the Steelers and Bell are both better served to work out some sort of contract extension by the July 16 deadline.

“I think the Steelers are nowhere near as good a football team without Le’Veon Bell, and Le’Veon Bell — because of the talent that’s around him — allows him to do a lot more than most running backs could ever consider doing,” Bettis said, according to Nate Davis of USA Today. “If he was on a different team, they’ll put eight guys in the box; if he lines up (wide), they’ll double cover him. So, they would do so much to limit him somewhere else.”

Bettis also offered up some advice for both parties.

“It’s a difficult scenario obviously,” Bettis said. “(Bell’s) got an understanding of what he feels his value is. The Steelers have what they believe their value is. But I think ultimately, they need to both get in a room and figure this out, because I think neither are as good without each other.”

In the end, Bettis said he thinks the steelers and Bell will ulruimately get a deal done by July 16.

“I think they will, because if he goes through this year without that contract, I think it’s going to be really difficult to sign him long-term after this season,” Bettis said earlier this week on NFL Network’s ‘Good Morning Football’.