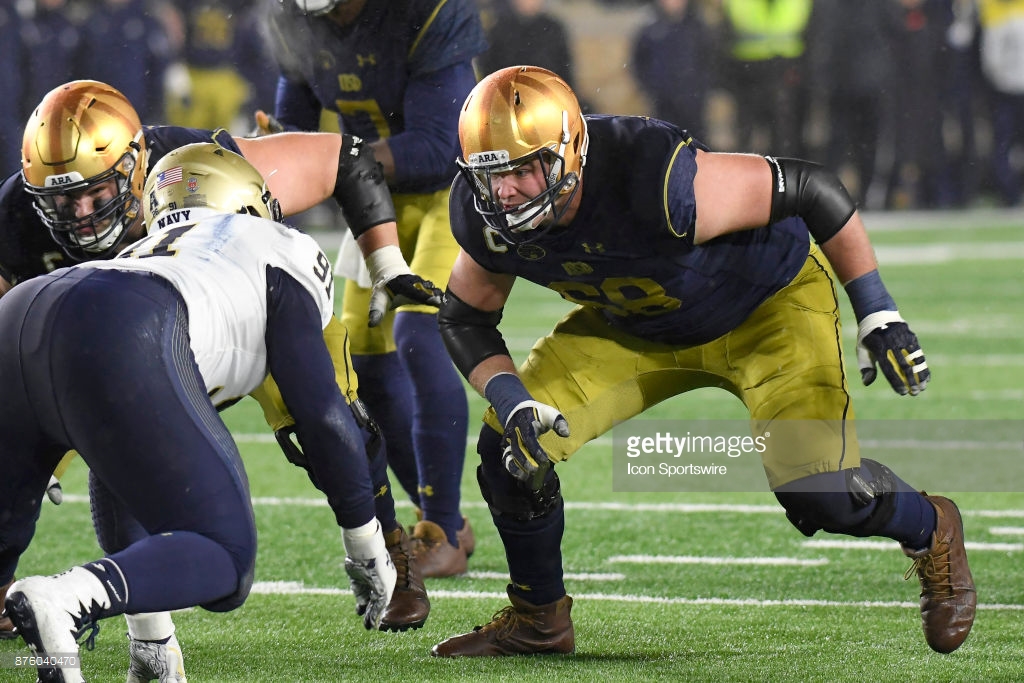 One of the biggest issues over the course of the past couple of seasons for the Cincinnati Bengals has been the offensive tackle position. And not for a lack of trying. Bracing for the departures of starters Andre Smith and Andrew Whitworth in back-to-back offseasons, the team drafted Cedric Ogbuehi in the first round and Jake Fisher in the second round of the 2015 NFL Draft.

Neither of them have panned out, suffice it to say, over the course of the past three seasons. The team even ended up bringing Smith back, an resorted eventually to sticking him back at right tackle when all else failed.

This offseason, the Bengals have already acquired what they hope to be a new left tackle in Cordy Glenn in a trade from the Buffalo Bills. While he is not an ideal option, he certainly presents a better candidate than any on the current roster.

But Cincinnati is not done exploring their options, as they are reportedly taking a good look at Notre Dame’s Mike McGlinchey, regarded as the top tackle prospect in the class (and in my opinion, the only one that would be worth taking in the first round).

They brought him in last night and had him out to dinner in Cincinnati, as one of their 30 pre-draft visits from non-local prospects. Even though he could be the first tackle to come off the board, there is a good chance that he is available for the Bengals to select at the 21 slot in the first round.

Glenn is not a long-term option at left tackle, in my opinion, at least not as a top-level player. He will also turn 29 already in September. So McGlinchey could easily be viewed as the eventual left tackle, if not the immediate, kicking Glenn to the right side, where there is a hole.

Ogbuehi has already started and failed at the right side, and frankly so has Fisher, whose 2017 season actually ended with serious medical problems. He had surgery to address an irregular heartbeat, though he was finally cleared for offseason work toward the end of February.

It’s quite possible if McGlinchey is drafted that both of their former high-pedigreed tackle draft picks end up serving as backups as they head into their fourth season, and likely contract years. While it will obviously be a contract year for Fisher, it’s unlikely the Bengals will pick up Ogbuehi’s fifth-year option as a former first-rounder.