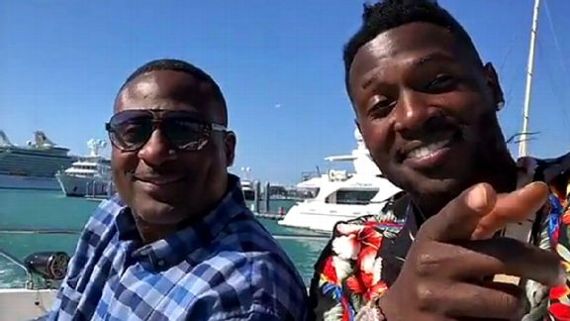 It might be common knowledge to some, but there always seems to be more than a handful who come out and say that they were not aware or did not remember that Pittsburgh Steelers wide receiver Antonio Brown actually comes from football bloodlines. In fact, his father was one of the biggest players in the league.

Of course that league was the Arena Football League, and the man is ‘Touchdown’ Eddie Brown.

Those who know anything about Antonio Brown’s background should be well aware that all was not always perfect when it comes to his upbringing, but he and his father have been able to reconnect over the course of his professional career, and Jeremy Fowler notes that that bond took another step forward recently when his father’s AFL jersey was retired.

Eddie Brown was a legitimate phenom in the AFL. Already a Hall of Famer, it’s little surprise that the Albany Empire called to tell him that they would be retiring his jersey. While he did not put up all these numbers with the Empire, Brown caught 950 passes for 12,736 yards and 303 touchdowns during his career, which spanned a decade from 1994 to 2003.

As I wrote about last year, Antonio Brown spent different portions of his adolescence living with his father in Albany and his mother in the Miami area. The latter move came when his father’s team relocated to the Midwest.

The Browns began to repair their relationship after Antonio was kicked out of his mother’s house and ended up with no place to go. Their bond remains one that they value, and football is unsurprisingly the chief commonality that they share.

Antonio even calls up his father after games and asks him for advice on how he performed and what he could do to get better. Let me write that again. Antonio Brown, the greatest wide receiver in the game and arguably one of the best to ever play the game, is still asking for advice. Admittedly, it is from his father, who is the greatest wide receiver in AFL history, but it’s still something.

The Browns were able to get together over the weekend as Eddie’s jersey retirement ceremony was scheduled. “All last week, he had all kinds of things set up for me”, Brown’s father said of his son’s excitement. “We went on the yacht. On the boat, bottle of champagne on my retirement. We went to South Beach and had a great dinner. He’s just been doing a whole lot of events to recognize me to say, ‘I’m proud of you, Dad.’ He’s all-in with it”.

While he was honored by the fact that his playing career was recognized in such a tremendous way, Eddie Brown said that the greatest part of the weekend was the opportunity to get closer to his son. “Time always heals wounds”, he said. “I think he is starting to understand a lot more things but where he’s at now mentally, he feels there is no other bigger support system than having his dad by his side. And I’m honored. It’s about building that family tradition of doing things together”.

And he also admits now that he is the second-best wide receiver in the family.