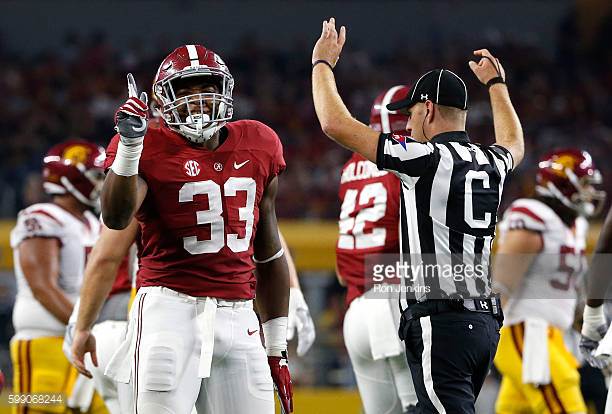 The Pittsburgh Steelers passed up on a linebacker with all seven of their draft picks in the 2018 NFL Draft. In CBS’ mock draft for 2019, that changes. I promise this is the only time we’ll talk about a mock draft for many, many months, but R.J. White gave the Steelers Alabama linebacker Anfernee Jennings. Explaining the selection, White writes:

“The Steelers could have used talent both at inside and outside linebacker in the 2018 draft and got nothing at either position. Part of that is where they were picking, as they saw four potential targets, including Rashaan Evans, come off the board ahead of them. Here they get another Alabama linebacker to address the issue, as Jennings should also be a first-round pick if he can show his knee injury from 2017 isn’t an issue.”

As he references, not only was Rashaan Evans a “potential target,” he was the target that the Steelers attempted to trade up for. But the Steelers missed out and, well, you know the rest. To the surprise of virtually everybody, they didn’t take a linebacker the rest of the way. Who knows what happens in 2018 but you have to think the position will be back on the radar after 2018.

Jennings is a tall drink of water at a a listed 6’3, 262 pounds, who will be a redshirt junior after the 2018 season. He was a spot-starter for the Crimson Tide and finished last year with 41 tackles (6 for a loss), a pair of forced fumbles, and a sack. He got work off ball and on the edge. In the college football playoff game against Clemson, he picked up his first career sack. #33, over left tackle.

Unfortunately, he suffered a severe knee injury late in the game, requiring surgery. You can see it here (the broadcast never showed a replay) of him getting his left knee caught as he hit the ground.

But if fully recovers and play the way he flashed a year ago, with more chances for playing time after their defense lost so many pieces to the draft, he could keep himself in that first round conversation a little less than a year from now. A name to keep in the back of your head.