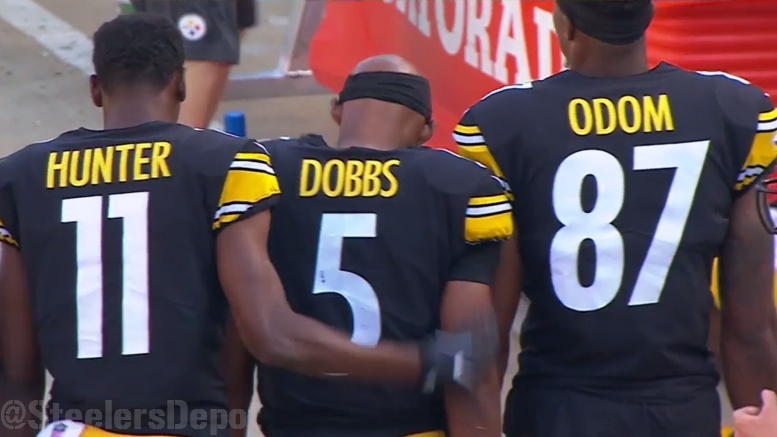 If you are a mid-round quarterback on a team with a franchise quarterback already in place, and sitting in the third-string role, and your team trades up in the third round of the draft to take another quarterback, then you should be worried about the state of your future employment.

That is where 2017 fourth-round draft pick Joshua Dobbs finds himself now and possibly up to September after the Steelers moved up three spots on Friday night to select Mason Rudolph out of Oklahoma State. Pittsburgh heavily scouted Rudolph, speaking with him at the Combine, meeting with him at his Pro Day, and then bringing him in for a pre-draft visit.

Based on Kevin Colbert’s post-draft comments, it seems that the Steelers knew they would not be taking a quarterback in the first round because they too much valued the ability to acquire a day-one contributor at that point in the draft. Perhaps only a ‘generational’ prospect such as Andrew Luck would not have been passed up at that point if he were to fall, though that of course would never happen.

With Ben Roethlisberger talking about playing for at least a few more years, the team now has to decide both what the depth chart and the roster looks like behind him. One thing is made pretty clear and that is that Dobbs will in all likelihood never bee Roethlisberger’s backup.

The question to be decided is if he will even have a roster spot. His best hope would be for Rudolph to clearly demonstrate the ability to be Roethlisberger’s immediate backup from day one, creating a situation in which Landry Jones can be expendable.

At least for me, that still wouldn’t knock Jones off the roster. The argument for Rudolph being the backup now is that he wouldn’t get the reps to develop as the number three. Well, neither would Dobbs, and between the two, Jones doesn’t need the reps.

The Steelers are not going to be too worried about cutting Dobbs for fear of having ‘wasted’ a fourth-round draft pick. They cut Doran Grant his rookie season as a fourth-round pick, getting him onto the practice squad, and he was gone by his second year. It happens. Rudolph fell into their lap and they’re a better team for having him. At the end of the day that is the important part.