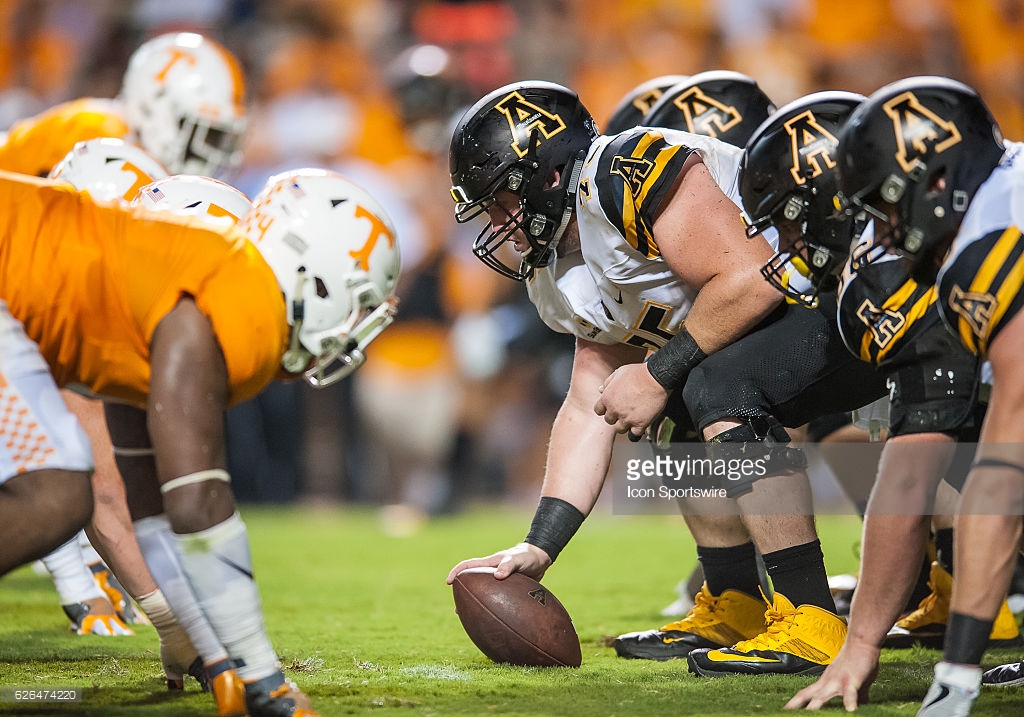 With the Steelers recent signings, we’re kicking this one back up again. With Appalachian State offensive linemen Parker Collins.

Collins a classic linemen. He looks like one, short and squatty. He plays like one, a reputation for a mean streak and the stats to back it up. A three year starter at App State after arriving there as a relatively unknown, two-star prospect from South Carolina, he moved all around the interior offensive line. Right guard, left guard, center, he saw time at all three of those spots. And it’s a lot tougher of an adjustment than it sounds like too.

That career began as a spot-starter at right guard before moving to left for most of 2014 and 2015. A switch to center basically began at the start of his senior season until late November, when more injuries across the line put him back at home at left guard.

““Words can’t put into place how good it felt,” Collins said at the time.

No matter what position he’s playing, he’ll play it with a level of intensity bordering on madman. Those aren’t my words either.

““Get the snap off first,” Collins said of his philosophy. “Then go crazy.”

That “crazy” mentality turned itself into a 1st team All-Sun Belt selection in 2016 alongside 2018 draft class member and likely draft pick Colby Gossett. A solid Pro Day workout, a 1.82 ten split, 28 vert, and 25 reps on the bar saw a slight bump to his draft stock. Still, one of roughly a bazillon offensive linemen draft eligible, he wasn’t selected and chose to sign as a UDFA with the Jacksonville Jaguars.

They released him on June 21st of the same year. After a tryout, the Rams signed him a month later right before they began camp, carrying him for the rest of training camp. He wasn’t kept on their practice squad. The only other opportunity he had the rest of the year was a fruitless workout with the Green Bay Packers. Like any player in his situation, there’s that creeping thought of never getting another chance. Not to mention needing to support yourself out of college so Collins got a job with Savannah River Remediation, a liquid waste contractor owned the the government. A far cry from football.

But now, he has another chance with Pittsburgh, who signed him earlier in the week as they round out some of their 90 man roster depth along the o-line. The Steelers usually carry 15 linemen into camp, the most of any group, to give them three teams of five linemen.

His key to making the team is versatility. That’s how Ramon Foster got noticed. Ditto Chris Hubbard. Now, they’re starters in the league and earned some serious money throughout their careers. Collins background at App State and being cross-trained at multiple spots is definitely a plus, as is his experience of going through a training camp circuit, dealing with the physical and mental grind.

He’s definitely got plenty of nasty to his game, too. Even if he doesn’t make it out of camp with the Steelers, he’ll leave a couple of bruises behind.