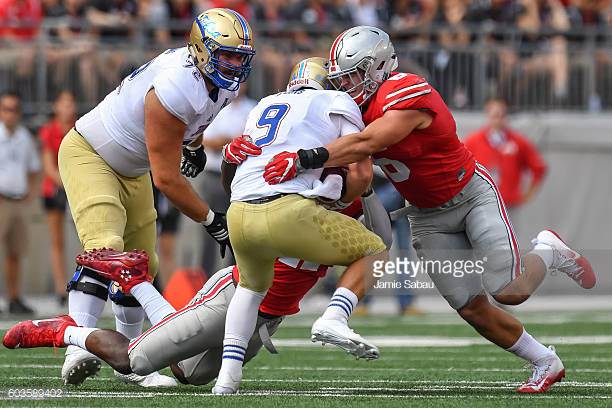 Drafttek’s most recent mock draft was a little bit ago, posted on April 4th, but as I’ve mentioned in the past, they have some of the most accurate Pittsburgh Steelers’ mocks of anyone in the national media. True to form, their latest edition for the Steelers comes out pretty solid. They kick things off by selecting Ohio State edge rusher Sam Hubbard to Pittsburgh at pick 28. In part, they write:

“He ticks a lot of the Steelers’ boxes with multiple years of starting production in a big-time program and some outstanding Combine numbers. Being a Buckeye also helps, with the Steelers drafting 6 alums since 2010…Hubbard should be a capable starter by the time the team is ready to move on from Dupree.”

If you listen to Friday’s The Terrible Podcast, Dave Bryan and I spent a little time on Hubbard, one player who should be considered a sleeper/darkhorse and isn’t talked about going to Pittsburgh more often. His 6.84 three cone at 270 pounds is absurd and while his 4.96 Pro Day 40 time will make some easy comparisons to Jarvis Jones, Hubbard admitted he got a late start at training for it. Last season, he racked up 13.5 TFL and seven sacks for the Buckeyes, both career highs, before leaving school as a junior. He checks plenty of boxes for what the team looks for in a first round pick.

The second round might seem like a luxury or bit of good luck, selecting Wake Forest FS Jessie Bates at pick 60. The explanation makes a lot of sense and things we’ve talked about over the past few months.

“Jessie Bates, as Tomlin would say, is a player ‘on the come’. He’s leaving the Deacs as a redshirt sophomore, having racked up 177 tackles, 9.5 TFL, 6 INT, and 10 PBU in 2 starting seasons at FS. The Steelers love to pick up young, ascending players at a discount and have shown interest in Bates.”

Bates would be an excellent pick in the second round even with the minor flaws in his game like a lack of size that makes him a drag-down tackler.

In the third round, the Steelers select Tegray Scales, an inside linebacker from Indiana to soothe that need. Scales has good tape in coverage but a 4.77 40 time is a little scary. Production, however, isn’t an issue. Over the past two seasons, he amassed 36.5 TFL and 13 sacks for the Hoosiers.

The fifth round brings some new blood for the offense with the selections of WR Auden Tate and RB Josh Adams. Tate doesn’t really fit the profile of who the team looks for at the position, not nearly athletic enough, but Adams makes plenty of sense. He was in my last mock draft and fits the mold of the big power back who has shown more open-field speed than most players, even more than Le’Veon Bell.

Finally, in the 7th, the Steelers drafted TE Jordan Akins and WIsconsin linebacker Jack Cichy. Akins is a 25 year old prospect who averaged over 16 yards per catch and a former draft pick of the Detroit Tigers. Cichy is coming off a knee injury but well worth a flier in the 7th round, especially after a strong Pro Day (33.5 inch vert, 10’4″ broad, 7.06 three cone). He finished his 2016 season with 60 tackles, seven for a loss, and a sack.