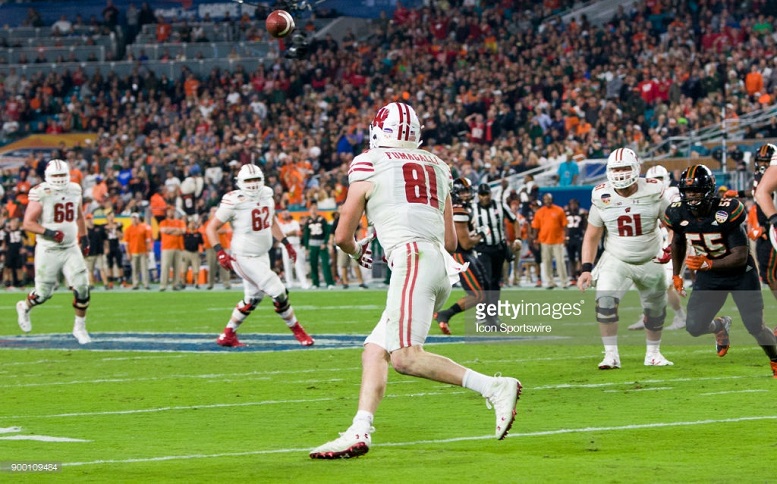 – Working to improve his blocking, especially on the move
– Gets off the line well into his passing routes
– Does a good job tracking the pigskin in the air
– Most effective as an inline player
– Comes down with contested throws, making him a good goal line threat
– Good football intelligence
– More effective against linebackers than safeties

– Is already 23, born in early 1995 per Google
– Thin legs for a tight end
– Body flexibility issues
– Heavy feet and stiffer looking hips
– Some concentration issues
– Bangs around with defenders who tend to throw him off routes

Lined up as the left inline tight end, Fumagalli fires off the line of scrimmage at the snap stepping towards the outside linebacker. He sets his base low, keeps his arms inside, and seals off the defender from the ball carrier running inside of #81’s backside. The tight end gives the backer a push when the defender starts to get by our prospect, not the smartest of moves, but not necessarily easy for the zebras to see. I liked the way the former Badger identified who he needed to block, stepped to him, got square, gave the runner time to get through the hole, and was nasty when the play went past him.

Split out left, #81 explodes off the line at the snap of the ball. He runs an 8 yard hook right at the sticks. Fumagalli lets the pigskin hit him in the belly, but still secures the catch. The former Badger gets tackles almost immediately, but falls forward for extra yardage. This play shows off his football intelligence of what he needed for the first down, but showed how stiff hipped he is and that chances are this pass catcher will not outrun any non-linemen on the field.

Fumagalli walks up to the line of scrimmage in a two point stance on a third and 11. He gets a free release with the safety giving him a 5 yard cushion. #81 runs a 10 yard hook, shields the ball from his coverage, makes the catch, but gets wrapped up a little over a yard and a half from the first down marker. This play shows his ability to make contested passes, but also his skinny legs.

Starting off as the left tight end, #81, at the snap, engages the outside linebacker close to him. When the defender decides to rush inside, the former Badger tight end rolls outside giving his quarterback a dump off target. Fumagalli catches the ball cleanly, spins around, showing off some elusiveness making a few defenders miss in the open field. He clearly sees the yard marker and dives for the first down. It took a lot of film to see #81 be athletic, but the gif proves it.

Troy Fumagalli is a hard working inline blocker of a tight end. He is a bit stiff and gets knocked around by a few defenders. However, the former Badger has decent hands and blocks better every day. I do not see him as an upgrade over Jesse James as an inline Steelers tight end. While I feel he could be an effective NFL starter and perhaps catch 50 passes a year, Pittsburgh has other spots to fill, but Fumagalli could make a nice addition to the Ravens who desperately need a tight end.