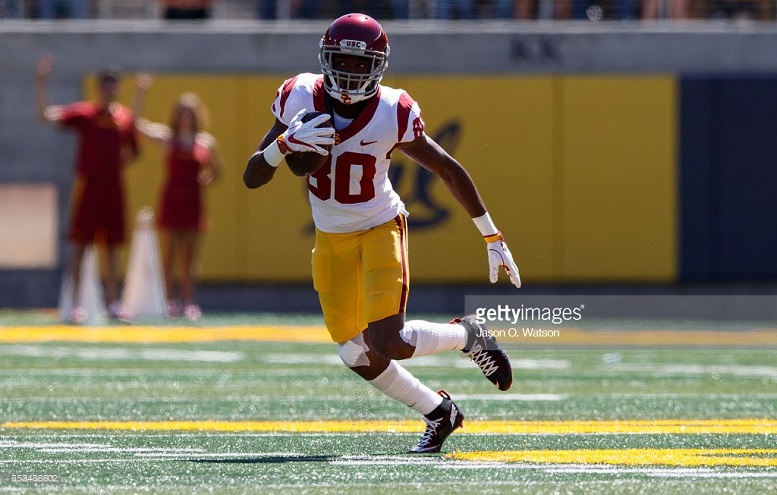 – Explodes off the snap
– Gets an uncontested release with quick footwork
– Good hands, able to snag passes out of the air
– Excels at finding soft spot of zone
– Uses quick feet to get space at top of route
– Not afraid to work the middle of the field
– Smart route runner, improvises well and works his way open when play breaks down

– Struggles to separate against physical corners
– Undersized
– Ceiling is capped as a strict slot receiver
– Many targets came as the result of being put in motion
– Small hands, only 8 5/8”
– Ran a less than optimal 4.70 40-yard dash but hamstring injury was a factor

They are not the fastest players on the field. They are not the biggest or strongest either but the slot receiver is typically the quickest player on the field. That’s what makes USC slot receiver Deontay Burnett so fun to watch. With elite quickness and footwork, Burnett was a nightmare in the slot in his last season with USC, totalling 86 receptions for 1114 yards.

Burnett sells to the inside and using his quick feet, he is able to flip the defensive back’s hips, giving him more than enough separation on his out route. The USC receiver puts everything in sequence at the top of his route, his feet and head sell the inside move, so much that the defensive back also gets caught peeking into the pocket. Burnett is an expert at using his athleticism to separate at the breaks of his routes and reminds me of former Steelers receiver Emmanuel Sanders.

The USC receiver is not given the benefit of a cushion above as the Colorado defensive back is face to face with Burnett in the slot. The only problem is Burnett is simply too quick off the snap to press or jam. Watch him give one quick step outside with his right foot before turning inside so quickly that the defensive back is stuck flat footed for a brief second. That second is all Burnett needs to cut inside on the slant and take the pass into the end zone.

For anyone keeping track at home, that’s two plays and two touchdowns with Burnett breaking tackles on both touchdowns. Some players just have a natural nose for the end zone and with 16 touchdowns in the last two seasons, Burnett is certainly one of those players.

One crucial requirement the Steelers require out of their slot receivers is to be able to find the soft spot of the zone for quarterback Ben Roethlisberger. Burnett is as good as finding the opening in the zone as anyone. He consistently works the middle of the field, getting enough depth behind the linebackers and in front of the safeties to find openings for his quarterback. He does just that on the above play and is one shoe string tackle away from finding the end zone once again.

While Burnett has smaller hands than you would like to see, it does not seem to hold him back as the wide out shows excellent ability to snag the most difficult of passes. He’s got excellent leaping ability, showing great concentration to leave his feet and come down with the football. The above pass looks like its headed for the back of the end zone but Burnett leaps, snatching the ball out of mid air and manages to get both his knee and elbow in bounds.

At the end of the day, Burnett weighs in at 185 lbs and he has been listed as low as 170 lbs. His small frame leaves him vulnerable to be re-routed or physically taken out of a play. That’s exactly what Ohio State safety Damon Webb does to him on the play above. By all means, Webb is a player that Burnett should beat easily in a foot race but Webb’s physicality doesn’t allow the USC receiver to reach top flight needed to get to the ball. His lack of size does leave some substantial worries for his transition to the NFL. He will most likely have to be put in motion like he was constantly at USC to allow a free uncontested release.

The Steelers added a young wide receiver from USC last season, drafting Burnett’s former team mate JuJu Smith-Schuster in the second round. Is there a chance they can be reunited once again through the NFL Draft? I certainly believe so, as the addition makes sense for a few reasons. Eli Rogers is stuck in career purgatory after his ACL injury, with there being no telling if he’ll return to form or even return to the Steelers. Should the Steelers want to add a younger player with an almost identical skillset and size to replace Rogers in the slot (5’10 187 lbs), then Burnett makes perfect sense.