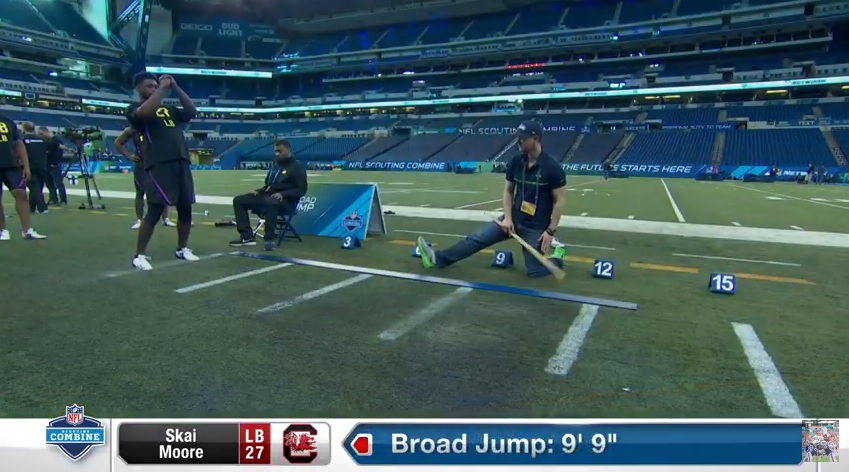 -Fluid athlete that is very comfortable moving any direction
-Great feel for the position
-Impressive range sideline-to-sideline
-Able to see past blockers into the backfield, finding the football quickly
-Fires downhill quickly against the run
-Extremely comfortable playing zone coverage, and has a knack for baiting QBs
-Impressive ball skills for position

It’s not often you’ll see a linebacker in the SEC coming out of college with 14 career interceptions.

Meet Skai Moore, one of the most productive linebackers in SEC football history, both in tackles, and interceptions.

After missing the 2016 season due to herniated disc surgery in his neck, Skai Moore bounced back in a big way during the 2017 season for the South Carolina Gamecocks, earning first team All-SEC defensive honors once again during his four years as a starter at middle linebacker.

Moore is a bit light in the pants at just 224 pounds, but he’s as productive as they come, both in the tackling department, and in the ball skills department.

Asked to do a bit of everything for the Gamecocks over the last four years, Moore answered the bell each and every time.

Against Kentucky during the 2015 season, Moore draws the assignment of the h-back sprinting out into the flat near the goal line. Moore stays step for step with him, but watch the way he reads the quarterback’s eyes, flips his hips and drops into the throwing lane, breaking up a potential touchdown pass.

Later in the game against Kentucky, Moore comes up with a huge one-on-one stop along the goal line.

Look at the way Moore reads this play quickly, firing downhill to blow up the offensive tackle in the hole, before then walling off the running back right there in the hole, negating a potential touchdown.

I love the way that Moore doesn’t waste steps, and packs a punch when he goes to tackle, despite being a bit lighter than the position usually asks for.

Once again, look at the force of the tackle Moore makes here.

Not only is he trying to shed a blocker down the field, he gets his pads low quickly, exploding forward and upward to plant the North Carolina quarterback on his back.

This play right here had me fired up about Moore. Coming out of high school, he was one of the top linebacker recruits in the country. As soon as he stepped foot on campus at South Carolina, he was terrific. If he’s fully healthy once again, and all medicals clear, give me a guy like Moore in the later rounds.

In zone coverage here, Moore simply baits Marquise Williams into this throw in the red zone. He reads Williams’ eyes well and squeezes the window quickly, showing the ability to make a play on the ball away from his frame, resulting in a touchback in a close game.

While I do think Moore will struggle in man coverage at the next level, I think Moore will be an elite zone coverage linebacker, due to his feel for the area around him, the ability to read the quarterback’s eyes without being manipulated to move off of his drop.

He’s not an elite run defender, but he moves well when defending the run, and is a solid tackler when inside the box. Open field stops give him trouble, largely because he doesn’t seem to understand how to break down at the point of attack to make the sound stop in space.

Overall, Moore is a guy I have pegged as a Day 3 sleeper. Should he land in the right situation, I think he has Pro Bowl potential. The neck injury should be cleared, considering he played the entire 2017 season without issue.