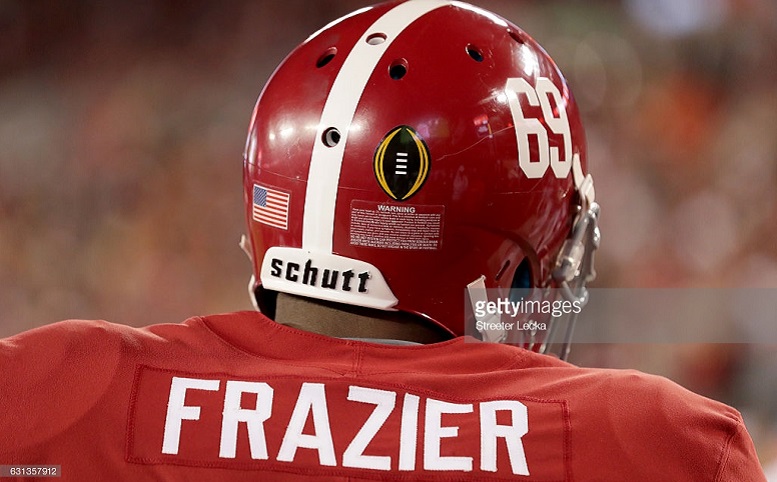 – Anchors well.
– Moves quickly for a man his size
– Good motor
– Can handle his own against double teams
– Shoots his arms well, keeping blockers from getting to his body

Lined up across from the left guard versus a spread formation, Frazier immediately reads run from the snap. He slants into the zero gap, a bit high, then starts slipping past the guard. This gets the attention of the pulling left tackle and the defender does a good job of getting his arms up to keep the two blockers off his body aka not allowing himself to be double-teamed. #69 disengages enough to swallow up the back for a minimum gain. I like the way he keeps fighting through the contact and finds the ball carrier.

On a second and 6, #69 lines up directly across from the center. At the snap, Frazier past the line of scrimmage using his shoulder to slice past the right guard that is responsible to pick him up. He is a hair too late to the QB as the signal caller had already handed off the pigskin to the receiver in motion on a jet sweep. The defender doesn’t give up on the play and helps bring the ball carrier down for a short gain. I like his hustle on this play and the disruption he created at the line of scrimmage.

Facing a run heavy formation on a second and two, #69 looks across the aisle at the left guard. At the snap of the pigskin, Frazier meets his guard at the line; however, the defender gets stoned at the line because the guard was lower and kept a more solid base. This takes the Crimson Tide member out of the play on an outside run. As a former offensive lineman and o-line coach, I can tell you that the lowman usually wins as this play demonstrated.

Once again Frazier lines heads up with the left guard, then the center hikes the ball. #69 attacks the inside gap reading as the guard pulls away. This time the defender stays low while keeping his powerful legs driving. The torque forces the o-lineman back, which allows the Bama player to free half of his body to wrap up the ball carrier for a short loss. If Frazier can get rooted in, he becomes all that more difficult to block.

Spawned by the dinner with Coach Tomlin and the Steelers hiring of his college position coach, Karl Dunbar, Frazier is a unique prospect who could help out the defensive line without a big investment. He certainly isn’t flashy; however the former Crimson Tide member moves quickly for a man his size, fights through double teams, and has a good motor. Some questions still remain: can he command double teams at the next level or is his lack of college production scheme or talent related? I think Pittsburgh should give him a look late Saturday afternoon.