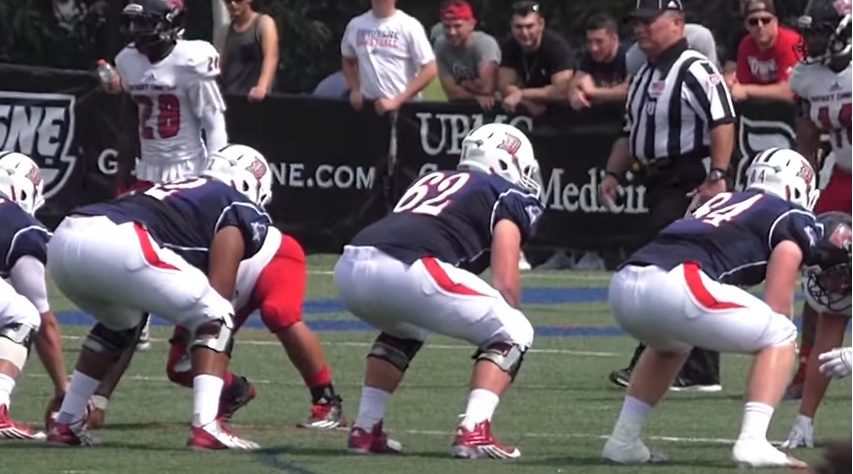 With the Steelers recent signings, we’re kicking this one back up again. Sticking with the trio of offensive linemen signed last week, moving onto Larson Graham.

There’s something about a hometown kid that makes you have to root for him. That’s who Graham who, as long as you don’t hold him being born in Ohio against him. But Graham signed with the Dukes, who played on Arthur J. Rooney Field, and after a redshirt season, moved into the startling lineup and never looked back.

He started every game at right tackle as a redshirt freshmen, never relinquishing that spot for the remainder of his college career. They won three conference titles and an FCS playoff berth in 2915, though they lost a heartbreaker in the first round, defeated by William & Mary 52-49.

By the time he ended his career, he accumulated 46 starts at right tackle and named NEC All-Second team three straight seasons.

His Pro Day workout was solid. A near sub 5 second 40 yard dash, a 28 inch vert, and 9’1″ broad. Here’s a snippet of his scouting report from Tony Pauline and Draft Analyst.

“Graham is a smart, efficient lineman who plays with a good degree of athleticism. He must physically mature and get stronger but offers possibilities in a zone-blocking system.”

They also noted his nasty disposition, similar to what we talked about with Parker Collins, and judging by this clip, the story checks out.

But like so many, it wasn’t enough to get selected, which I’m sure came as no surprise to even his biggest supporters.

The Steelers brought in several Dukes for rookie mini-camp. That’s not uncommon. They’re local, maybe a little well-known than other players, and it’s an act of good-will to create some football karma. Quarterback Dillon Buechel and offensive linemen Wayne Capers Jr. attended their rookie minicamp. Neither were signed. Graham took a different part with tryouts as a Buccaneer and Falcon, where he signed with the latter shortly before training camp opened up. That came after OL Trevor Robinson hung up his cleats, just as Daimion Stafford did for Pittsburgh last year. That opened up a roster spot for Malik Golden, who impressed and now has a shot to stick around into 2018.

He was cut at the end of the preseason after playing mostly on the interior given his lack of size to remain at tackle. As far as I can tell, he didn’t sign with any other team the rest of the year. He probably hung out on the workout circuit. A grind to try to do but a path others, like Mike Hilton, have had to take before until they found their footing.

It’s hard to say exactly where Graham will line up this year. Probably at center and it’s likely he’ll see some time at guard. It’s rare for a Steelers’ backup linemen to only be asked to play one spot. That’s no way to make a roster.

Graham is going from Art Rooney Field to the Rooney family. That’s stuff dreams are made of.