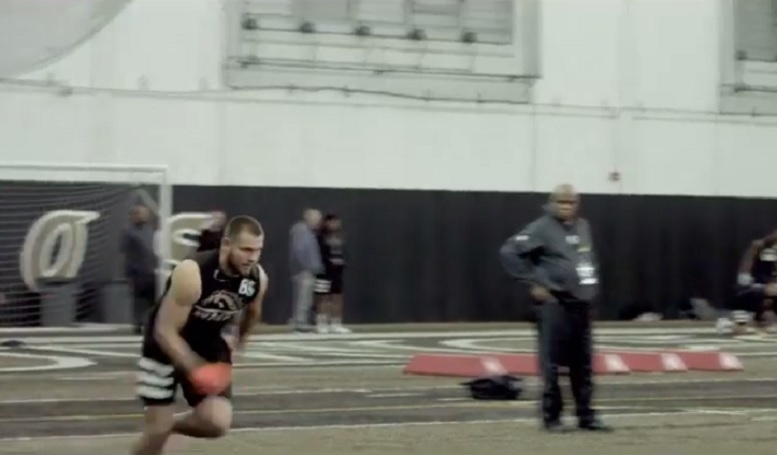 The Western Michigan pro day took place last week and the Pittsburgh Steelers had personnel on hand to observe it. In total, 12 members of last year’s Western Michigan team reportedly took part in the school’s annual pro day in addition to a few guests participants. Tight end/fullback Donnie Ernsberger was one of the 12 and he told me Wednesday morning that Steelers tight ends coach James Daniel was present at the pro day and not only did he have dinner with him, but he put him through his pro day position drills as well.

Ernsberger, who measured in at this year’s scouting combine at 6026, 241-pounds, ran the 40-yard-dash in Indianapolis in 4.78-seconds and did 15 reps on the bench. He did everything at the combine except for the 60-yard-shuttle and he reportedly accomplished that at his pro day in 11.97-seconds.

Over the course of his final three seasons at Western Michigan, Ernsberger caught 45 passes for 528 yards and 5 touchdowns. 34 of those receptions for 394 yards and 4 touchdowns came last season, however. He started all 12 games last season and led WMU with 931 total plays (800 offensive, 131 special teams). He was also a key blocker for the WMU rushing game which ranked 21st in the nation with 224.8 yards per game on the ground.

At the NFL level, Ernsberger is expected to be more of a fullback and an h-back than he is a traditional tight end. The fact that he was invited to the scouting combine this year says a lot about Ernsberger, who admitted recently in an interview that he grew up a fan of the Steelers.

Last year the Steelers drafted former western Michigan outside linebacker Keion Adams in the seventh-round but he unfortunately missed his rookie season with a shoulder injury.