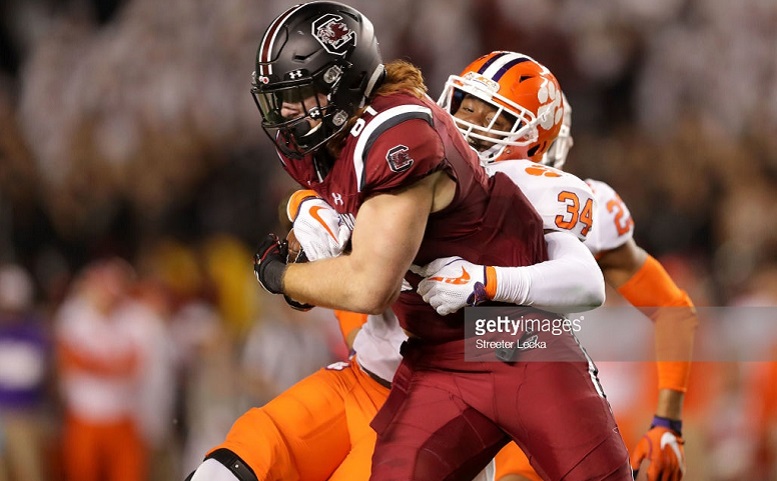 The annual college pro days will get underway starting today and ESPN draft analysts Todd McShay figured it would be a great time to release his third mock draft of 2018. In his latest offering, McShay has the Pittsburgh Steelers selecting South Carolina tight end Hayden Hurst at 28th overall.

McShay writes of the selection:

Hurst is a big (6-4, 250), athletic target who can contribute immediately. A former pro baseball player, Hurst has good ball skills and can help stretch the seam for Ben Roethlisberger and that potent Pittsburgh offense. He’s also a good blocker.

Hurst, as I recently mentioned in a combine-week post, recorded 100 receptions for 1,281 yards and 3 touchdowns in three seasons at South Carolina with 92 of them for 1,175 yards and all three touchdowns coming in the last two seasons. He measured in at the scouting combine last week at 6044, 250-pounds with 32 3/4-inch arms and 9 3/4-inch hands. He ran his 40-yard-dash in 4.67-seconds and posted a short-shuttle time of 4.37-seconds.

While Hurst is indeed considered one of the top all-around tight ends in this year’s draft class, it’s hard to imagine that the Steelers will ultimately draft him in the first-round with Jesse James and Vance McDonald presumably both remaining in place for the 2018 season.

Here’s something else to consider when it comes to Hurst and that’s the fact that he’s already 24 years old with his 25th birthday being in August. The Steelers normally prefer much younger players when it comes to their first-round draft picks. With that said, Hurst said he had an informal meeting with the Steelers at the combine last week.

In his recently updated top 50 prospects for 2018 NFL Draft list that was released on Wednesday, Daniel Jeremiah, one of several draft analysts for NFL.com, has Hurst ranked 31st overall and here is what he has to say about the former draft pick of the Pittsburgh Pirates.

Hurst is a former pro baseball player who walked on as a tight end for the Gamecocks. He has excellent size, speed and ball skills. He was primarily used as a move tight end. As a route runner, he is very smooth and quickly builds speed. At South Carolina, he wasn’t asked to run a lot of traditional option routes and work back to the quarterback. However, he excels on vertical routes and crossers. He tracks the ball smoothly and has a big catch radius. He received the ball quite a bit on tight end reverses and proved plenty capable of making defenders miss or out-running them to the corner. He’s more than willing as a run blocker and, while he lacks power, he does a nice job of shielding defenders. Hurst should be a Day 1 starter and has tremendous upside.