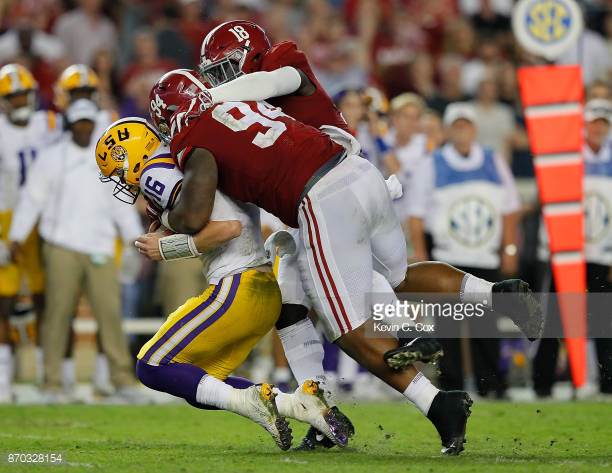 The Pittsburgh Steelers had a formal meeting with Alabama NT Da’Ron Payne, according to a report from the Trib’s Joe Rutter. Rutter tweeted out the information a few moments ago.

Alabama defensive lineman Da’Ron Payne, who played for d-line coach Karl Dunbar, said he had a formal meeting with the Steelers #NFLCombine

For the Crimson Tide last year, Payne recorded 53 tackles (1 TFL) and 1 sack last season as a true junior. He had 36 tackles and 3.5 for a loss the prior year. He will work out tomorrow with the rest of the defensive line group.

He’s viewed as a first round pick and an unlikely selection for the Steelers at pick 28. There’s hardly room to find Javon Hargrave snaps let alone a second, and true, nose tackle, though some will argue the Steelers need a “true” run stuffer. Payne helped make up an excellent Bama run defense.

Payne is the first defender we know have visited the Steelers.

Our Josh Carney wrote about his report on him yesterday, which you can check out below.

UPDATE: Rutter also notes Stanford DL Harrison Phillips also had a formal meeting with the team. He racked up 17 TFL and 7 sacks last year though struggled at the Senior Bowl.

Stanford’s Harrison Phillips said he has a formal interview with the Steelers set up for Saturday night.