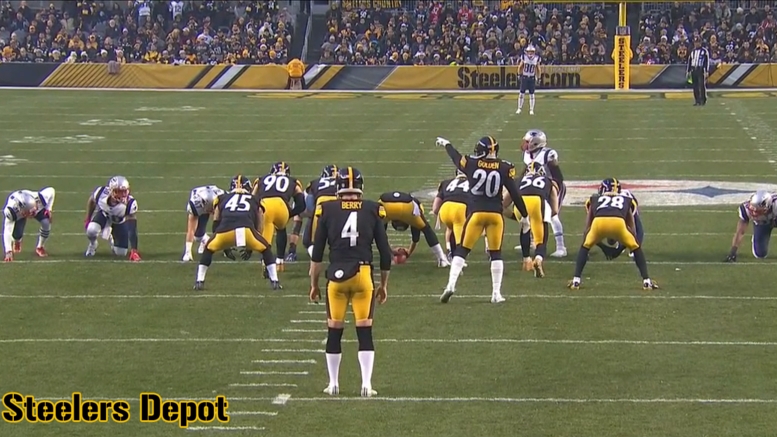 Free agency is paint-drying dull for the Pittsburgh Steelers. So until someone pokes them with a stick and they do something, I want to talk about my favorite topic: special teams.

With the trimming of the roster they did Wednesday, there’s one major spot that’s opened up no one was talked about. The upback, also called the personal protector, on the punt coverage unit. That spot has been held by Robert Golden since 2013. Now, he’s a free agent.

I still think there’s a chance Golden comes back for the minimum; this is a Steelers team, after all, pinching every penny and looking under every couch cushion. But if he doesn’t, it’s an important role that needs to be addressed, even if it’s easy to forget about.

Think of the upback as the quarterback of the punt team. I wrote in 2015, when Golden was two years into the job, what that role typically entails.

1. Count and declare the number of defenders in the box
2. Tell the long snapper which direction he should block
3. Make a “Set” call, allowing the LS to begin the play at any point after this

If anything goes wrong on getting the punt off, odds are, it falls on Golden’s shoulders.

That’s part of the reason why he was the Steelers special teams captain until 2017, when they didn’t name one. Golden was no elite special teamer. He wasn’t on the level of Roosevelt Nix or Vince Williams in terms of their ability to cover ground, be physical, set the tone. But Golden was a leader of that group with his experience in the system and at the position.

A personal protector is like the garbage truck. Your trash is supposed to get picked up without a hitch, without you even really noticing. But if that fails, you quickly realize something stinks.

That’s what happened on the Steelers last block punt allowed in November of 2016. Baltimore came in scot free, got the block, and that essentially ended the game. As we broke down at the time, miscommunication between Golden and Sean Davis led to the failure.

Point is. It’s a really valuable position, more than the rest.

Of course, it’s not an impossible void to fill. The Steelers have some options, I’m sure Danny Smith will have a plan. But so few guys on this team have gotten work there before. Going through my camp notes in 2017, Davis and Fitzgerald Toussaint got a couple reps there. Davis is the most likely replacement this year – I have to add I still don’t like the idea of defensive starters running down punts and plahying defense – but if the team goes that route, they have to replace Davis’ right wing spot. Fix one spot, create another opening.

Pittsburgh already has some of the worst depth in the return game, a situation made worse with the loss of Eli Rogers. I don’t want the team to add another special teams spot as makeshift, figuring it out as they go along, just as they did in the kick return game for most of last year (with predictable, bad results).

I know most people don’t care about it and just assume the Steelers will figure it out. But losing a five year starter anywhere is a big deal. If this was a starting safety, just in the losing Mitchell is, it’d be a big hole to address. If this was a starting left tackle, everyone would be talking about how it has to be addressed. Pittsburgh lost a critical piece with Golden’s loss. Having him meant total trust in that unit. If they don’t get back to that level, it’ll cost them dearly.