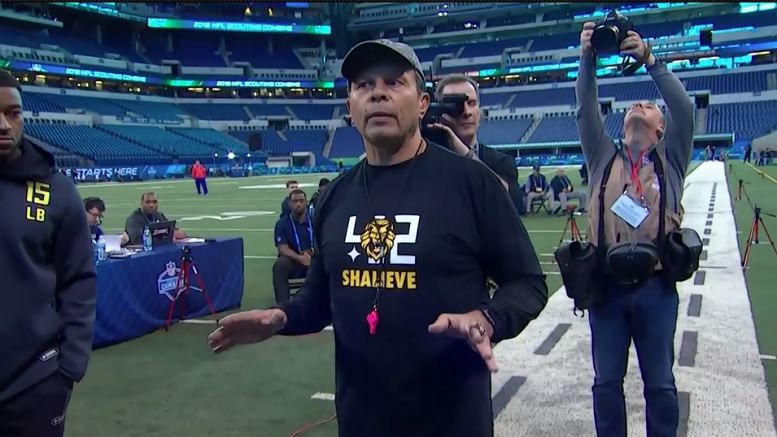 Sunday featured the linebackers on center stage at the 2018 NFL Scouting Combine in Indianapolis and Pittsburgh Steelers scout Mark Gorscak, who has run the 40-yard-dash at the annual event pre-draft for several years, made sure to dedicate the day to linebacker Ryan Shazier, who will miss the 2018 season due to the serious spinal injury he suffered last season.

“Guys, welcome to the combine. We want to dedicate this group here, because you’re a linebackers, to Ryan Shazier,” Gorscak told the large group of linebackers while wearing one of Shazier’s Shalieve T-shirts on Sunday. “And we all know Ryan had an injury right now and he’s making an amazing recovery. He’s made a lot of progress on his purpose. The joy is in the journey and he’s going through a journey and you young men are going through a journey also.

“Everything we do, we want to remember Ryan, because Ryan blew this combine up and he was a first round pick and he’s outstanding football player in our league. And one think I know about Ryan Shazier, I ain’t betting against him of coming back and he’s making a great progress right now. So let’s remember his meaning in spirit and we’re going to get things done today in this group.”

Later in the afternoon Shazier spoke over the phone to Rich Eisen and Mike Mayock of the NFL Network and expressed his appreciation for Gorscak and the linebackers dedicating the day to him and he insisted that he will overcome his injury and play in the NFL once again.

Several days ago, Steelers general manager Kevin Colbert said during several interviews at the combine that Shazier will not play in 2018 as he continues to rehab from the spinal injury he suffered exactly three months ago today. Shazier, however, reiterated during his Sunday phone conversion that his goal remains the same as it was when he initially suffered his back injury.

“My end goal is to allow the Lord to let me come back and play at the high level that I was before,” Shazier said. “Every day I try to get better. I strive for the Hall of Fame and I was doing that through this year, the whole time I was playing. And I still do that while I’m doing rehab. I know it’s still a possibility. I have the Lord and he has my back and I constantly feel I’m going to come back and play football.”

The process is about doing the right things, right now. Not worrying about what might happen later, or the results, or the whole picture.