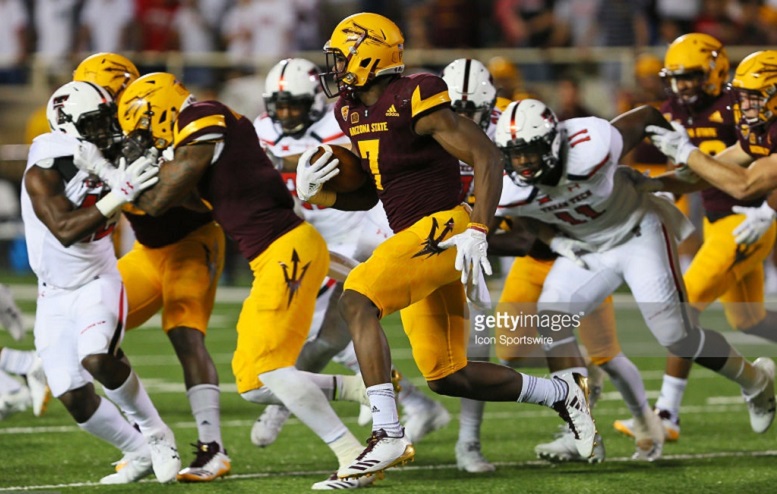 Quite a few big pro days are taking place on Wednesday and we can now pass along word that the Pittsburgh Steelers reportedly have a position coach present at the Arizona State annual event.

According to Brad Denny, who covers Arizona State for a local television station, Steelers running backs coach James Saxon is present for the school’s Wednesday pro day. It also looks like there might be another scout from the Steelers present as well.

The fact that Saxon is present probably isn’t totally surprising being as running back Kalen Ballage is an easy player to link to the Steelers ahead of this year’s draft in addition to the fact he registered a 123.4 SPARQ score at the NFL scouting combine this year. Demario Richard is another Arizona State running back Saxon might be looking at on Wednesday.

Ballage had 1,984 rushing yards and 27 rushing touchdowns in college on 450 total carries. He also caught 82 passes for another 684 yards and 2 touchdowns at Arizona State. Several major media draft analysts project Ballage to be selected somewhere during day-three of the 2018 NFL Draft.

As for Richard, he rushed for 3196 yards and 26 touchdowns on 646 total carries during his college career at Arizona State. Several believe he’ll ultimately go undrafted this year, however.

The Steelers could be in the market for a third running back this year during the draft as it doesn’t look like they will re-sign Stevan Ridley or Fitzgerald Toussaint this offseason. Additionally, one of last year’s draft pick, running back James Conner, is currently rehabbing from a knee injury he suffered last season that resulted in him needing surgery.