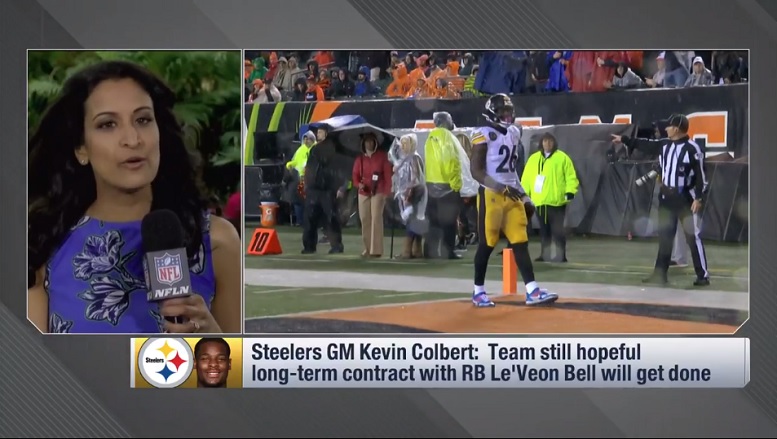 While the Pittsburgh Steelers may have put contract negotiations with running back Le’Veon Bell on hold until after the 2018 NFL Draft is over, the team is still expected to try to get him signed to a long-term extension prior to this year’s July 16 deadline. For now, however, the two sides seem to be far apart on an average yearly value for the running back, according to Aditi Kinkhabwala of the NFL Network.

“Le’Veon Bell wants $17 million a year,” Kinkhabwala said from the owners meetings in Orlando, FL this week. “He wants to be paid exactly like Antonio Brown is paid and so the Steelers are saying, ‘Well, we’re going to wait a little while before we address that fully because clearly the Steelers don’t feel that that’s where Bell’s value is.”

Kinkhabwala goes on to say that guaranteed money isn’t the issue with Bell and him getting a long-term contract done with the Steelers and that it’s only his average yearly value that he’s concerned about right now.

While we’re on the topic of $17 million per season, do you remember this rap from Bell this past August?

Currently, Bell is wearing a $14.544 million franchise tag and if the Steelers can’t sign him to a long-term contract extension by the July 16 deadline, he’ll have to wait until after the 2018 season is over for a mega-contract and such a deal will likely come from another team at that point with him being an unrestricted free agent. In the meantime, Bell, just like he did last offseason, isn’t expected to take part in any of the Steelers OTA practices and if no new deal is signed by July 16, he likely will skip all of training camp and the preseason just as he did last year.

Recently, Steelers general manager Kevin Colbert was asked an interesting question about Bell by Mike Florio on PFT Live. Colbert was asked by Florio to explain how hard is it to put a proper value on a running back such as Bell when he knows there’s a possibility one year, two years, or three years from now, he’s more than likely to get to a point due to an accumulation of wear and tear where he’s not the same player he once was.

“Right and that can happen,” Colbert answered. “Obviously, it happens at running back more often than any other position and we realize that. But we also aren’t going to bet against his ability to finish out a long-term deal if we’re able to come to that agreement. We wouldn’t have tagged him, we wouldn’t say publicly that we want to sign him long-term if we had those concerns.

“So, hopefully, again, that’s something that we kind of put on the back burner until we get through this period [of the offseason] and we’ll try to reinstate those talks and not on July 14th. Hopefully, we can maybe address it quicker than that. But, again, I’d love to have Le’Veon finish [his career in Pittsburgh]. He’s proven to be, you know, he’s had a couple injuries, but those happen at that position and you can’t be afraid to sign a guy in the event that he may get hurt and that’s why we’re trying to deal with it.”

I know that I’m going against the consensus thinking, but like I stated a few weeks ago, I think the Steelers will ultimately get Bell signed to a long-term contract extension prior to the July 16 deadline. Obviously, if that doesn’t happen, we can expect Bell to not show up until Week 1 of the 2018 regular season at the earliest. Additionally, at that point, one can easily speculate that 2018 will be Bell’s final season in Pittsburgh.

If you’re hoping that the Steelers ultimately rescind Bell’s franchise tag between now and the deadline, Colbert reiterated again to Florio that such a thing is very unlikely to happen.

“Nah,” Colbert said. “Again, I always say that of course it’s a possibility, but not a probability. We wouldn’t have tagged him if we ever felt that. Right now we know that Le’Veon will play for us in 2018, if he plays anywhere. So, that part would never be. I wouldn’t say never because something crazy can always happen, but that wouldn’t be a probability.”

Is Colbert worried at all that Bell might sit out most of, or the entire 2018 season, should he not get a new deal by the July 16 deadline?

“Nah,” Colbert said. “I mean he’ll be a Pittsburgh Steeler in 2018. Again, unless he did something that he didn’t do last year, I think we can assume that when he decides to – if he doesn’t and we don’t get along term deal done – he’ll show up and he’ll be ready as ready as he can be. But again, ideally we’d love to have him there for training camp, not only for himself, but for the rest of the team.”