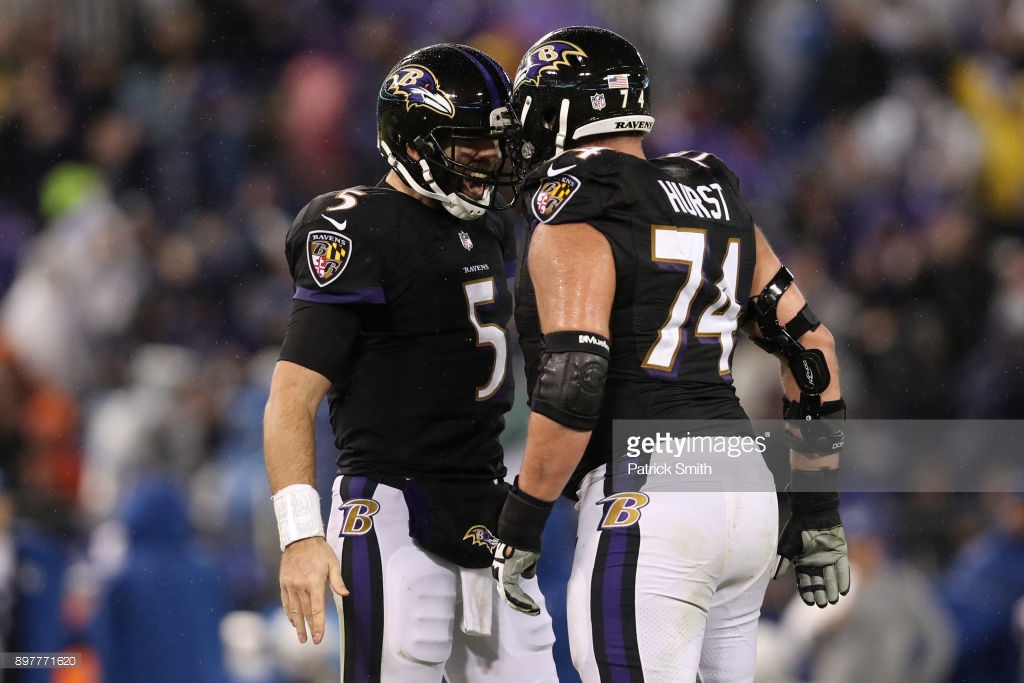 It isn’t surprising when fringe players end up re-signing with their teams at the opening of the ‘legal tampering’ period, which is a period of three days prior to the official start of the new league year during which players and their agents can be in contact with other teams.

It gives them an opportunity to get a feel for their market value, and if the offers are not very inspiring, they often just end up re-signing. Ramon Foster has done this multiple times already, and others with the Pittsburgh Steelers have signed during or just after that window as well, but it happens with all teams.

The Baltimore Ravens just did that with James Hurst, who spent the 2017 season as a full-time starter for the first time in his career, doing so at left guard following a season-ending injury to Alex Lewis. The team was plagued by injuries along the offensive line last year, and he was only one among the casualties.

But Hurst did play the best football of his career, which is clearly evidenced in the new four-year, $17.5 million contract that he received from the team, which averages nearly $4.5 million per season. While that is not the top shelf, that is certainly on the fringe of starter money.

With Lewis and Marshal Yanda, their regular starting right guard, expected to return for the 2018 season following their injuries a year ago, and with third-year former top-10 pick Ronnie Stanley entrenched at the left tackle position, this calls into question the future of their right tackle, Austin Howard.

Howard was a late signing after he was released by the Oakland Raiders, as the Ravens needed to replace Rick Wagner, who signed a big deal in free agency with the Detroit Lions. Hurst was in the running to start there before Howard was signed.

This certainly makes one wonder whether his time in Baltimore will prove short, though he signed a three-year deal worth just over $15 million. It included only a $3 million signing bonus, so they would only accrue a maximum of $2 million in dead money, or $1 million for 2017 if they designate him a post-June release.

But they will have to do so quickly, because he is due a roster bonus worth $2.5 million. The problem is that with his meager $1.5 million base salary for 2018, he actually doesn’t offer as much cap savings as you would hope–$3 million pre-June, $4 million post-June.

Hurst has ample experience playing outside, but they could also move Lewis to the outside and allow Hurst to remain at left guard. That was a possibility for the right tackle position that was discussed prior to Lewis’ injury and Howard’s signing.

In the meantime, a decision must still also be made for center Ryan Jensen, who will be a free agent after he also turned in a career-best season for the Ravens. They have returning depth in Nico Siragusa, who was injured last year, as well as Matt Skura and Jermaine Eluemunor.