Putting a bow on the entire 2018 NFL Combine, an action-packed couple of days at Lucas Oil Stadium. Breaking down the winners and losers from the week as a whole. Let me know who you think should’ve made the list below.

– Josh Allen and Josh Rosen performed well but it was more expected that Allen was going to dominate. So I’ll give the edge with Rosen, who sprayed a great deep ball and showed good ball placement. I need to look at them more but if you made me choose any QB out of this talented class, it’d probably be Rosen.

– Saquan Barkley…what more is there to say? Dominant in every area. 4.4 flat at 233, 41 inch vert, 29 reps on the bar. The flaws in his game are minor. Clearly the best back of the draft.

Other backs who impressed? Georgia’s Nick Chubb, who tested better than I expected, Rashaad Penny for an impressive 40 time, and Bo Scarbrough might have been the second most impressive back in attendance. Big, powerful, caught the ball really well.

– At receiver, D.J. Chark flashed speed and only adds to the evaluation of him being a deep threat. D.J. Moore is squarely in the first round conversation and potentially will be the first receiver off the board. MTSU’s Richie James got some quality exposure after playing at a mid-major and Antonio Callaway, after a disaster of a 2017 season, ran fast and put on a solid workout.

Allen Lazard tested like a phenomenal athlete for his size. 6’5 and can leap 38 inches? That’s going to help out his draft stock. And while J’Mon Moore didn’t run fast, he tested overall like an elite athlete. Someone on the Steelers’ radar.

– Defensively, Tyvan Bryan is now a first round candidate after an elite workout. Classic three tech in a 4-3. And I like Andrew Brown’s punch and first step, though inconsistency is going to make him a mid-round pick.

– Sam Hubbard came in heavier than expected and didn’t run but showed he can play DE or OLB. Great bend and flexibility. Three cone was one of the best time I’ve seen in awhile (6.84). Could be in the mix for Pittsburgh.

Kylie Fitts with a similar time too (6.88). Think he’s another fit.

Harold Landry was one of the top edge rushers of the day. 1.59 ten split. 6.88 three cone and was as comfortable going backwards as he was going forward.

– At inside linebacker, Malik Jefferson had a solid, underrated afternoon. Gotta give credit to FSU’s Matthew Thomas who didn’t get much loved despite a jaw-dropping set of numbers. 4.58 40, 41.5 vert, 10’11” broad, 4.28 short shuttle.

Of course, Leighton Vander Esch put up good numbers across the board. Ditto Oren Burks, who presents good mid-round value. And Micah Kiser wasn’t an outright winner but one of the biggest surprises of the entire Combine. Tested a lot better than I anticipated.

– In the secondary, Louisville’s Jaire Alexander was great in every area. Justin Reid at safety proved why he should be in the first round conversation. Avonte Maddox showed potential to play in the slot and Joshua Kalu jumped out of the stadium. And the top guys largely didn’t disappoint either from Ohio State’s Denzel Ward to Florida State’s Derwin James.

– He wasn’t awful but Lamar Jackson didn’t show the consistency that others did. Too many lollipop throws. Quinton Flowers showed he’s going to have to make a position change and J.T. Barrett was one of the bottom-tier QBs invited. He didn’t test as well as Flowers either so a position switch is going to be hard to pull off too. Luke Falk was uninspiring, too.

– Not many losers at running back. I’m still impressed with Mark Walton’s tape but his workout (4.6 40, 31.5 vert) was underwhelming and he didn’t catch the ball as cleanly as I had hoped. Ronald Jones pulling up at the end of his first run was a bummer but hard to call him a loser.

– For as good as Calvin Ridley looks good on tape, he didn’t test like the first receiver off the board. Tested like one of the worst and only a solid 4.43 saved him. Most of the other numbers were well below average. Teams who are beholden to those measurables could drop him.

Mentioned Quadree Henderson as a guy who didn’t run fast or test like someone who was twitchy. Rough across the board. Not sure what the story is but Dante Pettis didn’t work out either. Bummed out.

– Tight ends were strong. Hard to find anyone who really struggled. Durham Smythe a slight disappointment and Ryan Izzo tested pretty poorly. But not a lot to gripe about.

– We all know about offensive tackle’s Orlando Brown’s workout. One of the worst, objectively speaking, the Combine has ever seen. Here’s his web. 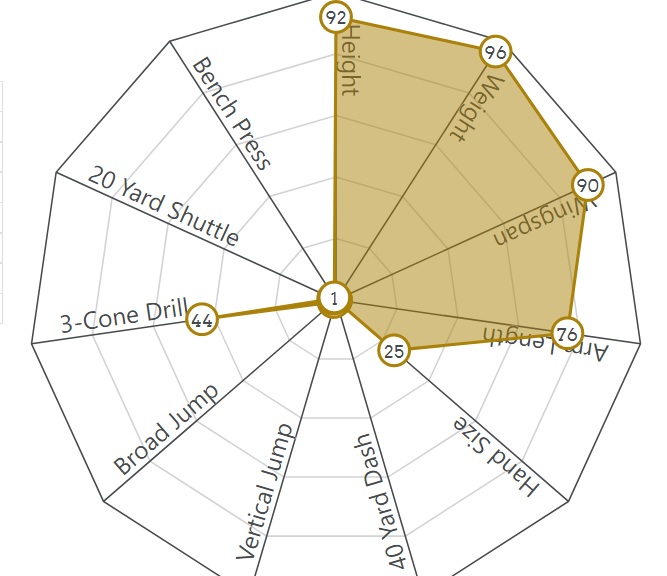 Yeah…yikes. That’s gotta drop him out of round one and perhaps as far as into Day Three. Wouldn’t shock me.

Not impressed with Utah’s Salesi Uhatafe. Really limited athlete. Wouldn’t even consider drafting him despite his size and length.

– Some of the bigger interior guys struggled even relative to their position. Derrick Nnadi and Tim Settle are super-limited players who I view as just zero tech pluggers in a world where even the big guys gotta pass rush. Hard to throw a huge investment in them.

– Some of the edge guys who didn’t look great. There’s a lot to like about Tulane’s Ade Aruna – has size and explosion. But that 7.53 three cone is killing me. Successful DE/edge with that kind of time? Not many. James Hall leads the way. For OLBs, you look to Paul Kruger and that’s about it. History working against him.

– Not a lot of bad at inside linebacker. Some late round guys who predictably didn’t impress: UL’s James Hearns and Florida State’s Jacob Pugh. Slow and stiff.

– Iowa’s Josh Jackson had a really weird day. Good ball skills but tall in his pedal, stiff, and didn’t play fast. Average 40 time, too. Not a guy I’d take in the first round, not that corner is in super high consideration anyway.

Jamarcus King’s 4.7 40 is difficult to ignore, too. Apparently injured his hip, too. Maybe he’ll run better at his Pro Day. Needs to.

– Disappointed Kyzir White didn’t run and his broad was worse than two offensive linemen (9’5″). And Kameron Kelly wasn’t as impressive as I thought he’d be. Falling into Day Three.