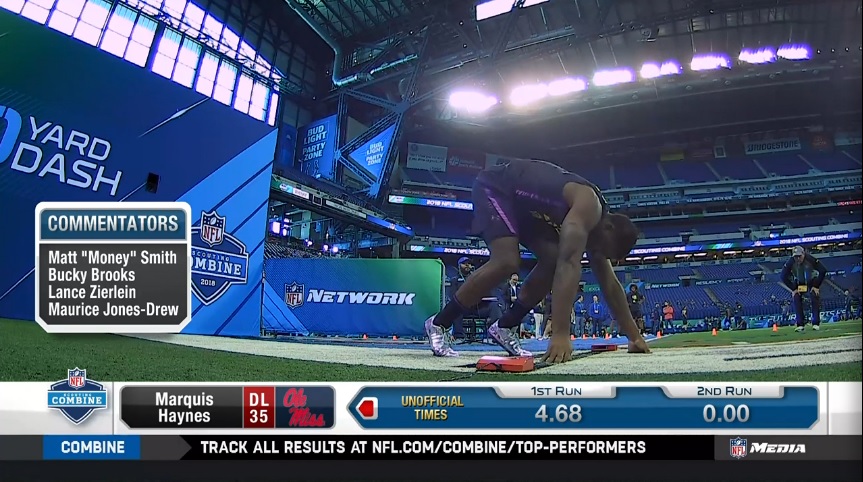 Longest day of the NFL Combine just wrapped up Sunday. Defensive line, outside linebackers, inside linebackers all on the field. In all, close to 100 players participated. Let’s talk about it.

– Florida’s Taven Brown got hyped up by Mike Mayock yesterday and didn’t disappoint. 4.98 40 (1.68 ten yard split) at 298 pounds, 35 inch vert, 9’11” in the broad. Showed explosion that can make him valuable as a three tech, his likely home in the NFL. Do want to see more power on his punch. Was slapping the bags, not making good contact, but that’s often a product of guys focusing too much on steps and their turn than the dummy.

– I want to take a deeper dive into Reggie McKenzie’s son, Khalil McKenzie. Lacked college production with only 5.5 TFL and three career sacks. But an easy-mover in drills and the numbers he tested at today didn’t even fully represent how good he moved. Able to drop his hips and move laterally. Didn’t speed through the bag punch, which is the way it’s supposed to go. It’s not about speed – it’s about the punch and the bend.

Another interior three tech with some late round value.

Explosive, fluid, kept his eyes up on his punch (lots of guys look down) and showed upper body control moving in space, arms pumping and not flailing around. If the Steelers didn’t have Javon Hargrave, this would be a guy to circle at 28.

– Fort Hayes State’s Nathan Shepherd didn’t disappoint. Well put-together, ran well, efficient and smooth in pass rushing drills. Sounds like a second round pick. Only issues I saw, and he wasn’t alone, was trying to cheat some of the change of direction drills, guessing when the coach was going to send him. Has to keep his arms pumping too through drills.

– Some guys who I thought struggled? VT’s Tim Settle and Florida State’s Derrick Nnadi. To be fair, they are more of the traditional nose tackle type so you’re comparing them to most of the interior pass rushers. But Settle was super limited, couldn’t get low enough to slap the bags, and Nandi was stiff.

– Unfortunately, Vita Vea suffered some sort of injury and didn’t go through drills. 40 time and ten split were solid though (1.77/5.1).

– Andrew Brown is probably a 3T but was with the ends and OLB group. Inconsistent but the best thing about him is his violent punch. Watch him kill his teammates holding the bags.

Andrew Brown has a violent punch. Way you want this drill to look. pic.twitter.com/CSiQqJtVMH

– Miami’s Chad Thomas is cut from a similar cloth (6’5 281) but didn’t test as well as Holmes. Good production though and he’ll get drafted.

– The linebacker class across the board was really impressive today, inside and out. When it comes to the edge/tweeners, you gotta look at the three cone times. Anything under seven seconds is ideal.

Boston College’s Harold Landry hit that mark and pretty much every other one today. 6.88 in the three cone, 36 inch vert, 4.19 short shuttle (the best as of this writing), which is better than what anyone did last year, too. A 1.59 ten split is just as good and he looked awfully comfortable when dropping into coverage.

I’m hoping he’s there at 28 but not holding my breath at this point.

– Kansas’ Dorance Armstrong is a difficult guy to figure out. Ran terribly (1.7/4.87) and came off a bad 2017 season but looked like one of the best guys going backwards and a decent three cone time (7.12). Looks the part as a height/weight/length guy. Tape is going to have to tell the story, as it usually does, though the Jayhawks had him out of position. Big projection.

– Said yesterday Kylie Fitts could be on the Steelers’ radar and today’s workout should only further that idea. One of the few guys under 7 seconds in the three cone (6.88) with a 1.61 ten split. He and Ohio State’s Sam Hubbard looked good in coverage. Hubbard shows excellent flexibility and bend and that translated to his three cone, a stellar 6.84. Loose hips.

My biggest issue with Hubbard? If he’s in Pittsburgh, he’s gotta cut weight from the 270 he’s at. Not a big deal. He’s gotta stop false stepping out of his stance. Here, his first step doesn’t gain any ground like it should. Watch his left foot.

Not the only time I saw it.

– Bummed Arden Key didn’t run (he said he didn’t have enough time after recovering from surgery, will at his Pro Day) and his three cone is a little higher than I thought, though he’s a high-cut guy (7.16). Probably looking at near end of the first round value, which could get him in the Steelers’ conversation.

– Not a good day for Hercules Mata’afa. Undersized three tech in college and now coaches have to figure out where he fits in the NFL. But at 254 pounds with 31 1/2 inch arms, he ran 4.76 (1.64 split), 31.5 inch vert, and 9 feet even in the broad. 7.24 in the three cone. Below average athlete who was too chaotic in his upper half and had trouble keeping his balance changing direction.

So he’s not playing inside, these numbers aren’t good for the edge. Does he move off-ball? It’s a total projection and that’s hard to justify a high pick into him.

– Josh Sweat definitely a big winner. What a freak. 6’4/6 251 with 34 1/2 inch arms. 4.53 40, 1.55 split, 39.5 inch vertical. Absurd stuff. Medicals and lack of production (the first probably feeds the other) are the biggest questions but some draftniks think he could shift into the round one conversation.

–  Ole Miss’ Marquis Haynes looked fluid for how high-cut he is. Had some experience dropping into coverage in school. Raw and needs to stay clean to win but there’s upside.

– Finally, Georgia’s Lorenzo Carter put up some nutso numbers. 4.5 flat at 6’5, 250 pounds with 34 inch arms. But a lack of production is going to be a big concern for teams when they view a clearly elite athlete. Where’s his NFL home?

– Vandy’s Oren Burks is a sleeper. If you listened to the broadcast, you heard Mike Mayock point out his versatility. Began his career as a safety, then to OLB, then to inside. Late Senior Bowl call-up who I thought had a good Thursday practice. 4.59 40 at 233 pounds with some impressive explosion numbers (39.5 vert, 10’11” broad). If the Steelers go with a starter free agent ILB, Burks is a good compliment to that in the mid-rounds.

– And there are a lot of inside linebackers to like. The one who has gotten the most Steelers’ buzz, Leighton Vander Esch, was excellent. 4.65 40 is decent and the 39.5 vert and 10’4″ broad is really eye-catching.

– But I liked Malik Jefferson a whole lot, too. Top-level athlete who ran 4.52 and jumped 36/10.5 in the vert and broad. Steelers need to keep this guy in mind.

– Gotta give credit where credit is due. Micah Kiser surprised me today. Thought he was going to run in the mid-low 4.7’s. Wound up turning in a 4.66 with a 35.5 inch vert and 10’1″ is much better than I expected. Going to have to go back to the tape on him.

– Mike McCray ran about how I expected, which is to say not very well (4.76). Definite two-down thumper who shows stiffness opening up his hips. Upside of a Gerald Hayes type.

– Josey Jewell has gotten a lot of love here but at 4.82 with a 33 inch vert, 9’9″ broad, it’s hard to see him as a Mack linebacker. The three cone is really impressive though. Hard guy to figure out.

– Real nice day for Fred Warner. Definitely day two pick. Though he’s not an edge rusher, showed violence with his hands coming around the bag when most others slapped it. He’s a definite athlete.

– Story of the day, of course, is Shaquem Griffin. 4.38 40, which is just insanity, 20 reps on the bar and fought through cramps to finish out the day.

He’s still a tough evaluation and I think teams will have him all over the map. How I view him (as of right now at least)? A dime defender who can use his athleticism and put less of an emphasis on shedding blocks and holding the edge. Floor is a core special teamer. That caps his value but there’s certainly a role and ability to make an impact. Depending on the scheme, I’d consider him late on Day Two. But a great day for him.

– Lot of guys exposed in the bag drills. UL’s James Hearns couldn’t keep his eyes up, Leon Jacobs crossed his feet, Jacob Pugh kept stopping trying to transition and break downhill, and even Tremaine Edmunds was barely running over the bags and not picking his feet up.

– Guys also struggled flipping on a 45 degree angle and then coming downhill. No width, depth, guys rounding off at the top, not able to catch the ball and finish the drill. Coaches weren’t happy.

Rashaan Evans didn’t get enough width, Jeff Holland was tight and rounded at the top, and Darius Jackson was a mess. Didn’t gain ground the first time, then came too far over the next hash as a result, and the third flip was in the middle of the field. Jackson was one of the worst athletes out there.

Some guys who did the drill well? Jefferson and Kiser, who I thought was textbook. Coach also happy with Vander Esch for taking good angles and told Washington’s Azeem Victor that he had a perfect rep.