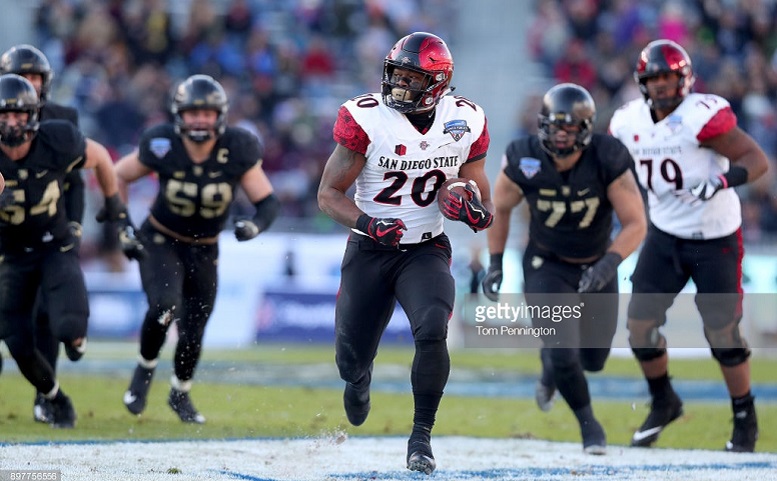 Today kicks off a wild four days at the 2018 NFL Combine. Up first will be the running backs, offensive line, and specialists, starting off at 9 AM/ET. Here’s a couple things we’re watching for at today’s events.

– Humboldt State OT Alex Cappa has some people thinking he should move inside to guard given a lack of length for his height (32 3/8 inches). That wouldn’t be a shock after Cappa played both at the Senior Bowl and fared well. A good workout might convince teams to keep him at tackle and anytime you have a small-school kid on a big stage, it’s critical he excels. One of the few times he can be on an even playing field with the rest of his peers. I expect Cappa to test reasonably well but you gotta put on the tape to find out what he’s about. One of the nastiest dudes in this class.

– Austin Corbett sounds like one of the “risers” of the class. Shouldn’t be surprising after an excellent Senior Bowl week. Thought he was the best one down there. Size, grip strength, and nasty with more length (33 1/8 arms) than someone like Cappa. Think you’re looking at someone sitting squarely in the second round who can play any position.

– Not a ton of standout tackles in this class. Oregon’s Tyrell Crosby has a chance to make a name for himself. 6’4/5 309, with 35 inch vines. Pay attention to him in the kickslide drills during the workout portion of the day.

– Another small-schooler who needs a good week. West Georgia’s Desmond Harrison. Was supposed to play in the Senior Bowl but got sick and lost about 20 pounds. Weight is back up in the 290 range. Huge opportunity for him. Gotta make an impression.

– Notre Dame OT Mike McGlinchey is an old-school dude who seemed to impress speaking with the media. Nearly 6’8 with 34 inch arms, 10 inch hands, and put up a respectable 24 reps on the bar.

– A heads up if you haven’t heard the news. Bad news for Ohio State center Billy Price. Injured his left pectoral on the bench press Thursday. Sounding pretty serious and that’ll ding his draft stock. Probably at least one round.

– The top offensive line in this draft? Easily Quenton Nelson. He could go in the top five and guaranteed to be the first one off the board. 6’5 325 guard who repped 225 a whopping 37 times yesterday. You’re going to hear his name a lot today.

– Fresno State’s Will Hernandez smartly dropped some weight, down 17 pounds from the Senior Bowl. A mauler but moves better in space than you’d think. Might not test super well but he’ll look good in drills.

– Fordham’s Chase Edmunds has been hit by nagging injuries but I’m hoping he can put on a good show in Indy. Put up great numbers when healthy.

– Fullback Dimitri Flowers (Oklahoma) is fluid for his size/position and solid out of the backfield. He’ll look good.

– Got a bunch of big names lined up. LSU’s Derrius Guice, Georgia’s Sony Michael, and of course, Penn State’s Saquan Barkley. Barkley wowed by putting up 29 reps on the bar yesterday. At 233 pounds, if he can even clock in around 4.4 (and it could be lower), it’ll be incredible. Star of the show.

– I think the Steelers like Rashaad Penny and he fits what they’re looking for well. Pass protection, though, is an issue. Let’s see how he times, too at 220 pounds.

– Miami’s Mark Walton was slowed down by an ankle injury last season. But he’s got great burst, an able pass protector, and special teams demon. A big day from him would really help himself out. Mentally tough player who similar to Artie Burns, has gone through a lot. Lost his mom and dad and is helping to take care of his sister. Easy to root for.

– Darrel Williams will test well for a big man. Nimble feet, soft hands. Just hoping he isn’t hurt – don’t have any height/weight on him yet.

– Oregon State’s Ryan Nall is an interesting story. Tight end/H-Back who wound up shifting to running back and flourishing well. But will he stick there in the NFL? At 6’2 232, maybe he’ll go back into that hybrid role. Sorta reminds me of another Ryan…the Bengals Ryan Hewitt, who has carved out a niche in the league.