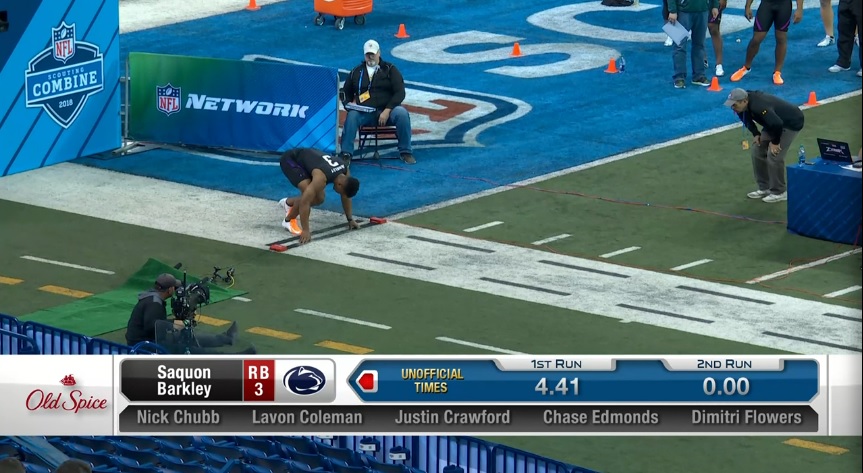 Day One just wrapped up at the 2018 NFL Combine. Today showcased the offensive line and the running backs. Let’s go through some of my thoughts on who excelled and struggled Friday.

– The elephant in the room – Oklahoma’s Orlando Brown. Objectively, one of the worst days anyone has ever had there. I do want to start with the positives, which I know, there isn’t much there. But he gave an interview on NFL Network after his workout and owned up to a disappointing day. Explained where some of it went wrong, like the bench press, where he said he didn’t use the breathing technique he practiced leading up to the Combine and that he intends to bench again at his Pro Day.

Brown said in practice, he would rep 18-20 times on the bar. Which still isn’t great but considering his arm length, would be a bit more reasonable. The other numbers though are also troubling. 5.85 40, around a 2.0 ten split, 19.5 vert, 6’10” broad. Sure, he’s a big ‘ol linemen, but those numbers measure explosion and lower body strength, two critical traits.

It’s nearly impossible to justify Brown as a first round pick off those numbers the the complete lack of success for anyone who has been even remotely close. No one hurt their stock more today than him.

– Let’s talk about some of the linemen who ran fast and moved well. Pitt’s Brian O’Neill led the group with a 4.82 40. Mike Mayock pegged him well. A top notch athlete who looked great in drills but thin lower half who has questions about his power. Thought he got exposed at the Senior Bowl.

UCLA’s Kolton Miller set a Combine record for the o-line with a 10’1″ in the broad. And that’s on a nearly 6’9 frame.

And West Georgia’s Desmond Harrison turned some heads like he needed to. Got his weight up after getting hit with the flu bug before the Senior Bowl. He blazed a 4.9 flat and was one of the most athletic players in drills.

Problem is, and it’s been pointed out by guys like Joe Goodberry, is that he seemed to not understand the point of some of the drills. In his kickslide drill, he’s supposed to half-man the “rusher” and seal him upfield. Instead, he met him square on and made contact. In the “rabbit” drill, when he was the rabbit – the guy who is supposed to run so the OL has someone to mirror – he acted like he was being evaluated and didn’t change directions and move around like he’s supposed to. Take a look. He’s #14.

And he was one of the last guys to work in Group One so it’s not like he didn’t have any examples of what to do. Have to be able to be coached. No one likes having to tell a guy what to do again and again. It still was a net positive day but sorta reminds me of Howard Jones, who was physically gifted but made too many mental mistakes on the practice field.

– Nevada’s Austin Corbett with a very nice day in both testing and drills. Solid base, good technique, and ultra-strong. 1.76 split was a pleasant surprise, for me at least. Been high on him since seeing him in Mobile.

– Orlando Brown will be the talk of who had the worst workout but Ohio State’s JaMarco Jones has to be right behind him. Super tight-hipped, lethargic, looked worn down by the end of the day. 1.95 ten split isn’t far off from Brown. In the rabbit/mirror drill, the coach got on him. “Gotta be faster than that!”

Easier said than done but he’s gotta move to guard at the next level.

– Ole Miss’ Rod Taylor with a steady, impressive workout. Didn’t necessarily wow in any one area but a well-rounded player who showed good feet and lateral movement. Good pedigree.

– You can definitely see why some think Connor Williams (Texas) is going to go in the first round, especially in a down class. Excellent athlete who got to his spot in the kickslide drill as well as anyone. He’s just got to make sure he’s a bit more coordinated as a run blocker. In the fold block drill, watch him drop his eyes and lunge. He’s at the top.

– Small schooler Greg Senat (Wagner) has a basketball background and looked pretty good in the mirror drill but is a little tight-hipped. At 6’6 with nearly 35 inch arms though, he’s an intriguing late-round option.

– Will Hernandez was one of the top guys of the day across the whole offensive line. Again, glad to see him drop weight from the Senior Bowl. He’s not an uber-athlete but smooth and fluid pulling in space and the numbers helped show that (5.15/1.76). Plays with a great base, able to drop his hips, and mirror. In the mirror drill, he stayed square to the rabbit and didn’t move all over the line. And that came after he was the rabbit and had to run around for a minute straight. Sure he was tired and still showed technique. Means he’s conditioned and has developed that muscle memory.

Goes back to his coaching under Sean Kugler, a great OL coach who makes his guys play with great detail.

– Wrote yesterday Iowa center James Daniels had a chance to capitalize on Billy Price’s injury. And he did. Another easy-mover who plays with great technique. He and Sean Welsh, a fellow Hawkeye, always coordinated with their hands extended, not flailing around like some other guys.

– Maine’s Jamil Demby didn’t have a great day. Numbers across the board were average to below (only 17 reps with 33 3/4 arms) and he stood straight up on his 40 and in drills. Leverage could be an issue. Struggled to get his hips open when asked to flip and to get depth on his kickslide drill.

– VT”s Wyatt Teller a better day at Indy than the week he had at the Senior Bowl. For whatever that’s worth.

– And Utah’s Salesi Uhatafe had to have been the most tight-hipped guy of the group. I’m not sure if he’s even draftable based off what I saw today.

– Taylor Hearns out of Clemson had a decent day but needs to keep his hands tighter as a run blocker.

– Broadly speaking, it was a really impressive group. Bigger backs but they ran well. Saquon Barkley, stole the show, as expected, with a 4.4 40 at 233 pounds and a ridiculous 41 inch vert. Excellent in drills and smooth catching the ball out of the backfield.

– Fordham’s Chase Edmonds needed a good day and he got it. Tested well and showed agility around the cones, dropping his hips and not showing any wasted motion in his steps or arms. 4.55 40 at 205 pounds is definitely respectable.

– Another nice day for fullback Dimitri Flowers. 4.83 40, and like he did in Mobile (and Oklahoma), caught the ball well.

– NC State scatback Nyheim Hines with the fastest 40 of the day, the only one to clock under 4.4 with a 4.38. Third down/return value, for sure who showed his punt return/lateral mobility through the cones.

– For anyone who didn’t watch and is just looking at numbers, Ronald Jones is recorded running a 4.65 but he pulled up with a left hamstring pull at the end of his first 40 run. Didn’t finish the day and that time is obviously skewed due to injury.

– SDSU’s Rashaad Penny turned in a great time of 4.46. Someone I think the Steelers will be interested in with his size and kick return value.

– Excellent day for Alabama’s Bo Scarbrough, too. 4.52 at 228 pounds, crazy 40 inch vert and 10’9″ broad, and he caught the ball cleanly and away from his frame repeatedly every chance he got. Day Two pick?

– Not many guys struggled today but Mark Walton, someone I’ve been high on, seemed to. A 4.60 40 at 205 pounds isn’t the worst thing in the world but a far cry from great, either. Did no better on the vert (31.5) or broad (9’10”), which only beat out guys heavier than him. Thought he would do great catching the ball but had at least one drop and a couple double-catches in the gauntlet. Not an awful day but not what he wanted.

– LSU’s Darrel Williams continues to do his thing. Sure, the 40 time isn’t great but he’s a build-up speed guy who has surprisingly soft hands out of the backfield. And that was on display yet again. Strong Day Three value.