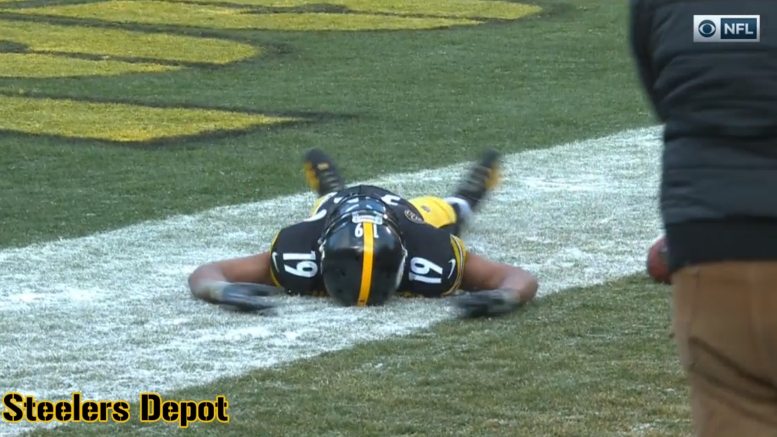 Pittsburgh Steelers General Manager Kevin Colbert talked about a diversity of subjects yesterday during his press conference at the Combine, ranging from the draft prospects that were set to be interviewed and worked out to the players on his own roster, and he had some important and emphatic statements about both.

One of the minor points that he mentioned was about their youngest wide receiver—and currently the youngest player in the NFL, though that is going to change after this next draft. JuJu Smith-Schuster had an exciting, energizing, dynamic, and productive rookie season in 2017. But the question now is what comes next for him.

It’s easy to project success for a player who caught 58 passes for 917 yards and seven touchdowns in 14 games as a rookie, all numbers that feature within the top five among rookie wide receivers in team history, the 917 receiving yards being the most.

Look at what he did, mostly as a 20-year-old, add a season of greater understanding and training and learning how to be a professional, another year of chemistry, a full offseason from the end of one year to the next. Add all of that in and of course Smith-Schuster is going to have a great year in 2018. Right?

Nothing is guaranteed, of course. Smith-Schuster has captured the imaginations, and the hearts, of Steeler Nation for now, but he is going to have to continue on the trajectory that he has put himself on in order to retain that good faith.

Or, as Colbert put it succinctly yesterday, “it’s up to him to match the standard he set last year”. And it’s really that simple. He was given the opportunity to produce in 2017 and he did, at least until the postseason game, during which he had just three receptions for five yards and one meaningless touchdown.

By no means am I implying that I expect Smith-Schuster to struggle in his second season, or that a regression to an as-yet not established mean is in order. It’s entirely possible that he catches 80 passes for over 1000 yards with 10 touchdowns in 2018.

But it shouldn’t be taken for granted what he was able to accomplish in year one, nor how difficult it is to build upon that. Teams will know quite a bit more about him heading into his second season than they did in year one, and I would guarantee that many of his opponents last year underestimated what he would be able to do, especially on deep targets.

The Steelers are hoping, and likely banking on, Smith-Schuster being a part of their long-term plans to pair with Antonio Brown, provided that they can afford him in time. the expectation is that Martavis Bryant will seek free agency in 2019. It is imperative that JuJu is who we currently think he is, and becomes who we believe he can become.