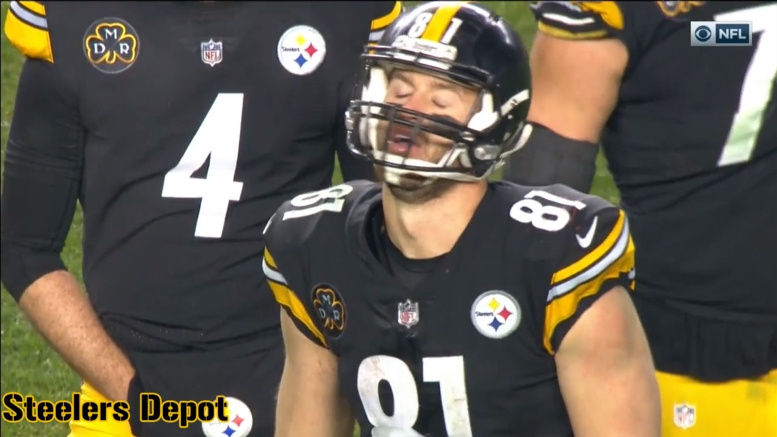 When a Pittsburgh Steelers player gets his name associated with a rule, it tends to be a negative association. The Mel Blount Rule came about to prevent the Hall of Fame cornerback from playing in the physical style for which he was known. The Hines Ward Rule restricted what the wide receiver was known for as a blocker.

But tight end Jesse James is happy with his own rule, even if it came too late for him. you already know what the rule is and why it’s relevant, so I’m not going to get too into it, but suffice it to say that it may have been the difference between the first seed and the second seed in the playoffs last season.

While James told the team’s website that “it’s nice to have the rule clearer”, he also expressed frustration over the call going against him last year, focusing on the fact that it was overturned upon review.

“It should have been a touchdown either way”, he said. “Whether it was the old rule, or this new rule. To reverse something on review it has to be clear cut. I feel like they didn’t do a good job on that. It’s nice to have the rule clearer”.

To that end, it’s worth reminding the reader of recent comments made by executive vice president of football operations Troy Vincent, saying that the league will “go back to the old replay standard of reverse the call on the field only when it’s indisputable”. Many believe that they failed to do that under the “clear and obvious” parameters for replay standard that existed for the 2017 season.

“Clarification is good for the officials. The past few years it’s been clear they don’t know what they are calling”, James continued. “Game-to-game you see a different catch that should have been ruled a catch, or a catch that wasn’t ruled a catch the week before. It’s good to have a little bit more clarification to make it easier for the officials to make the right call”.

The tight end said that all he wants to see is consistency and that he understands that human error is a part of the game. I think we can all agree that the situation was made far worse by the fact that it was called a touchdown on the field and then reversed upon review during the inaugural season in which review decisions come from somebody outside of the stadium.

“Without reasonable doubt, you have to know exactly what happened on the play to reverse it”, said the fourth-year tight end. “I feel like there were times they didn’t do that this past season. It’s good to have change in that and make it clear what is a catch”.

He went on to say that he feels “the rule still sounds about the same”, though it is noticeable absent of language about going to the ground, which is what did him in last season. “I don’t look at the rule book too much, I just play the game”.

If only we all could just focus on the game and let the rules fade into the background.