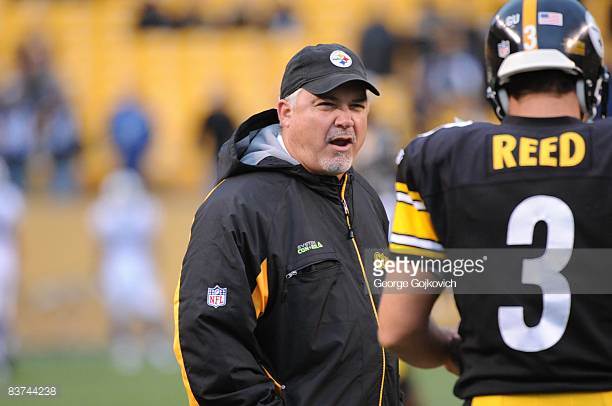 Bringing you another Pittsburgh Steelers’ interview courtesy of our good friend Ron Lippock of the Pittsburgh Sports Daily Bulletin. Today, Ron interviews former Steelers’ nose tackle Kendrick Clancy, who spent five seasons with the club from 2000 to 2004. He would go on to play in the NFL through 2009. Here, they discuss Clancy’s surprise of coming to Pittsburgh, frustrations with the team, but the realization that it was one of the best places he ended up.

First, tell us a bit about your new job in Cleveland.

Well, I’m happy to be their new special teams coordinator. I’m looking forward to that. It’s a situation where there was mutual interest and an opportunity for me to get back to the AFC North.

Any odd feelings about playing for a team you once considered a big rival?

That’s the way it is in coaching. I’m an Alabama alum but when I coached against Alabama I coached to win the game and had mutual respect for everyone I played. You couldn’t find a more loyal Alabama alum but I always wanted to win.

Stepping back, tell me a bit about how your NFL coaching career started in Pittsburgh? Why did Mike bring you in?

I coached for a year in Canada first so that was my real first professional experience. I did that on purpose – to coach older players. There was a big difference between coaching grown men and college kids.

I worked with Mike Tomlin in Cincinnati. I hope he saw in me a guy who was diligent and a guy who put the team in a position to win games.

How players are picked changes depending on where you work. I’m fortunate that with the Browns, Coach Dorsey used to play on special teams and Coach Jackson worked on special teams as well, so they understand it.

The big thing is really having three good specialists. If you have a good kicker, punter, and snapper that is the main thing. The first priority for a team is getting the top 53 players.  It’s a group effort. From the GM to the coaches and scouts. You watch tape of college and NFL players to help with decisions but it ultimately is the decision of the GM and head coach. My job is not to worry about who is playing and to coach the guys that do.

I have been blessed though to be around people that see the need and to have good specialists wherever I’ve been.

One – great enthusiasm. You have to play hard every play and overcome adversity. To get off your blocks, or get past being harassed downfield by two blockers as a gunner to finish a play. Every play is different. You may win or lose, but you have to finish every play. And to take advantage of matchups. It’s still a matchup game – even on special teams, just like on offense and defense.

Tell me more about that – how do you take advantage of matchups and player make-upon special teams?

In Arizona we had two Pro Bowl players. A rookie last year who was an undersized kid. He was a safety from the draft standpoint. He had a great work ethic and a high football IQ. Previously we had another guy that was a taller guy and wiry. He had great length and could get off blocks. They were both defensive guys so you take their ability into account in how they were used. We also had wide receivers work as gunners but they had to learn how to tackle because they never had to do that in college.

I always worked hard on special teams to get the right matchups to take advantage of the players’ strengths. I wanted linebackers on running backs, tight ends on defensive linemen. A cornerback gunner on a wide receiver. Sometimes you don’t get an ideal matchup though and this is where the effort and technique I teach have to help them win those battles.

Tell me about those Steelers special teams units you had?

I was proud of what we accomplished in Pittsburgh. Two Super Bowl runs, and from a personal standpoint we had a number of very good specialists. Reed, Suisham, Sepulveda, and Mitch Berger was our Super Bowl punter when Sepulveda was hurt. I was also blessed to have Greg Warren. It starts with those guys – we had great specialists. That’s the backbone of a special teams coach. To have coached all of those guys and know your techniques helped. I take a lot of pride in that.

How did Bear Bryant and Mike Tomlin handle special teams while you were with them – what were their approaches?

I worked with Bear Bryant as a graduate assistant and much of what I learned goes back to him. He would take the offensive and defensive guys and give them a leave of absence during practices to practice special teams on a different field. That was rare then.

Mike and I both worked together at Cincinnati. We were familiar with one another and how we viewed things. He coached the gunners and jammers while he was a position coach there. That’s what you want – a guy who was glad to have his hand in the pile.

Tomlin was always a big proponent of special teams. We always played hard in practice. Always physical. You could almost take a shot at a punt returner in practice to try and get the ball free. We practiced that. We both wanted to play aggressively and he gave us the time to work on special teams in practice.

Any good memories of your time on Pittsburgh?

The one thing about Pittsburgh was that great locker room. Guys cared about each other. It was fun to watch the dynamic of the team and watch it grow. Married and non-married guys would all go out and have fun together.

As a coach I wasn’t in the locker room as much as the players, but the enjoyment I had when I saw that was like being back at Alabama. That tradition and the fans. Its great to play for s great fan base like Pittsburgh and here in Cleveland. They love football and I love that aspect.

As far as plays, I remember coming to Coach Tomlin with a play I wanted him to consider. It was a reverse on a kickoff and Antonio Brown ran it for a touchdown as a rookie. It wasn’t blocked perfectly but just enough for him to get free. Those things stick out the most – seeing plays like that succeed.

Antonio was a great receiver and returner but he also was great at covering kicks as a rookie.  When he was a rookie I remember him losing his shoe halfway downfield but he never slowed down and got in on the tackle!

Tel me a bit about how Mike was with those in-game decisions on playcalls like the reverse?

Well, it may be made in seconds during the game, but you discuss the strategy during the week, and you usually discuss in advance doing it after the other team scores, or at the start of a half. It’s a coordinator’s job to watch more tape than anybody, so we’re always looking for a play that will give you great field position. And working with someone for a long time like I did with Mike and Bruce Arians gives you a shared vision.

I remember in one game we faced Wisconsin and they had the number one returner in the country and Ron Dayne. It was going to be a long game. So we decided in advance to try and force a fumble on the opening kickoff. To be more aggressive and getting the guys to get a hat on the ball to force a fumble, and it worked. You traditionally want the first guy to tackle to ball carrier and the second to go for the ball, and you coach that.

So, did Mike give you any fun grief for coaching for a rival – you going to take it easy on Pittsburgh?

Ha! They will try to win just like we’ll try to win. He didn’t give me any grief . There are only thirty-two teams in the NFL so you share moments in this day and age. I know we’ll both be ready to win when we face each other. Mike will always be a friend but not for those sixty minutes!

Well, good luck in Cleveland – for fourteen games at least!

And you too – for fourteen games too!