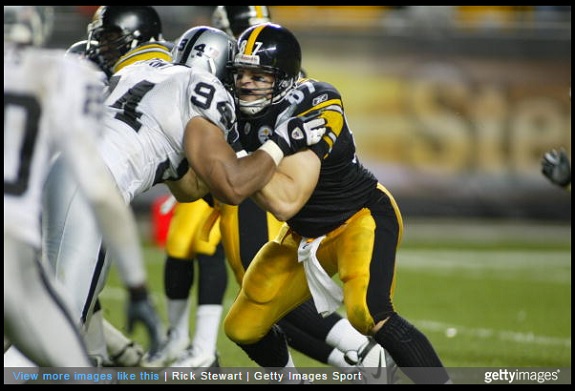 Bringing you another Pittsburgh Steelers’ interview courtesy of our good friend Ron Lippock of the Pittsburgh Sports Daily Bulletin. Today, Ron interviews Mark Bruener, former tight end and current scout for the team. They talk about his playing career, what got him into scouting, and what life on the road is really like.

First, tell me about life as a scout – what got your started as a scout and what do you enjoy about it?

When I was playing I would always go into the scouting room and talk to Bill Nunn and the other guys there that were so integral to the guys we drafted. I was always interested in understanding how all of these talented guys got there and would ask them questions about how we found all of these amazing athletes.

They tried to deter me about the job – said it was too much travel. But after I played for as long as I could I called a number of teams asking for a chance to internship with them, and [current college scouting coordinator] Phil Kreidler in Pittsburgh gave me a chance to pursue that interest.  After it was over he called and asked me if I was still serious about being a scout. Now, ten years later, here I am!

Is it professional player scouting as well as college?

Any guys you remember advocating for most?

I don’t really go find hidden players in rural Utah or in California. I evaluate all players in my area, whether he’s division one or division three. From there I get it down to a list of players I’m excited about and some we won’t even consider because they’d get drafted too high. The best pick we could have is the last pick, because that means you won the Super Bowl. But I look for Steelers type of players. A lot may be good players, but not Steelers types of guys.

David DeCastro was one guy I was particularly excited about. But it’s not me telling the front office to draft him. I provided the reports of who and what I saw and the room came to a decision.

Tell me more about what it means to you when you talk about a “Steelers type of player”?

Also, it’s about what they are like when they don’t think they are being watched. Do they give the same effort? You watch them work out before practice starts. Are they slouching..slowly sauntering to practice like they don’t really want to be there? You can see their body language. Are they engaged and locked in?

I’m dead serious. Every resource you can that may have information on a player. You’re investing millions in these guys  You can measure height, weight, hand size…but you can’t measure heart. You can see that in their body language and by talking to their coaches, academic advisors, anyone you can talk to.

Tell me more about the scouting process as it leads up to the draft. When and how does it start and progress for you?

It’s an extremely long process. This years draft scouting process started in May of 2017. I started at BLESTO where we get the first look at all of the prospects and look at all of the colleges to identify every prospect for NFL teams. I’m exposed to an immense amount of players and talent. We identify from there a list of prospects and when we go to colleges we evaluate players and do the write-ups and send them to the office. Then, we all come together as one big unit to discuss them.

Do you advocate for any at those meetings or is it more informational?

We have our favorites as scouts but it’s more of a discussion. We try not to show an affiliation towards any one player. I try and do a good job not to allow my emotional bias to affect what the room thinks of a player. My inflection may give me away but it doesn’t make a lot of sense for me to push a guy that Coach Tomlin, Kevin Colbert, or the Rooneys may have different thoughts on.

Tell me a bit about your personal draft process. Were you surprised to be drafted by the Steelers?

There were a lot of predictions out there and of course my agent was telling me who may draft me and who was interested, I visited teams before the draft and you know those teams are interested. I visited Pittsburgh, Detroit, and of course Seattle, since I went to school there.

I had a great opportunity to meet Coach Cowher and the rest of the coaching staff then. For the draft, this is a funny story. I was watching at my folks’ house and was waiting to see who would take me. As the Steelers pick came up the phone rang. They asked if it was Mark and I said it was, then they said hold on. Now, this was before cell phones. I look and see my name on the screen telling me I was drafted but no one got on and said congratulations ….I was ecstatic – I can’t describe the feeling. I don’t know if they were talking to someone about a trade or what happened though! But it was a dream come true. It was the chance to play  the sport you played since you were a kid at the ultimate level.

Who helped mentor you as a rookie – both on and off the field?

That is easy – he’s coaching with the Bengals now – Jonathan Hayes. He was in his eleventh season at the time. He came over from Kansas City and he took me under his wing. He taught me how to be a professional. To work out before practice, how to study the playbook and work on film study. Not to burn the midnight oil….to enjoy life but keep things in perspective. That my first priority was football. He and I are still good friends.

Give me a couple of funny experiences that you remember from your time there?

When I first got there I remember going into the locker room and seeing these metal bookends between the lockers. I wondered what those things were so I asked the equipment manager, Tony Parisi. He told me they used to hold the ashtrays for the guys that played in the 70’s. This was a team that won four championships, and they had ashtrays in the locker room! I know it was how it was done back then, but I thought that was amazing.

Another thing. I went through rookie mini-camp and then came back for the veteran camp. Cowher announced at the veteran camp we’d practice on the grass field. I was like, what grass field? In rookie camp we practiced on the turf field. I had no ideas where it was.

Well, I asked where and followed the vets. I ended up walking a city block, past Kaufman’s old warehouse, to this grass field that was literally under an overpass as people honked and yelled above us. I just thought, holy smokes, I’m walking down a city street with my uniform and pads to get to this field, and it’s only fifty yards long.

But I always remembered – this was a team that won four Super Bowls with this mode of operation. I figured they knew the right way to do it, and I bought into it right away. But it was funny.

After nine years with the team, how hard was it to become a free agent and how did that transpire?

I had nine years in Pittsburgh,  but they brought in Jay Remiersma and I knew it would happen. I knew it was coming…I wasn’t getting the reps. Still, it was difficult getting the call from Coach Cowher telling me he released me. I’ll never forget it. Every player in the NFL was a star on their high school team, in college.it was the first time someone told me I wasn’t good enough to make the team. It was truly humbling.

He told me that they had other players they wanted on the team. He was kind and professional, but as a player it was extremely tough to deal with. But, it’s part of the business, and I think it ended up extending my career.

I visited a number of teams. Jerome Bettis used to tell me, “Look, it’s a great game. But it’s a tough business.” And that’s what it was – a business decision. I found a new place to play in Houston and had a number of wonderful years there. I looked at it as a positive. I had to re-prove I had the ability again – to work harder to prove I had gas left in the tank.

From the perspective of a guy who has been both a player and scout, what advice would you give players entering the NFL today?

I get a chance to talk to a lot of kids, and I always say they are one play away from never playing again. Every day is a gift – you are fortunate you are to be out there. So give it everything you got on every rep on the weight room and on the field. And appreciate your teammates. You make relationships as guys come and guy that can’t be duplicated outside of football. So take advantage of that and know how fortunate you are every day.