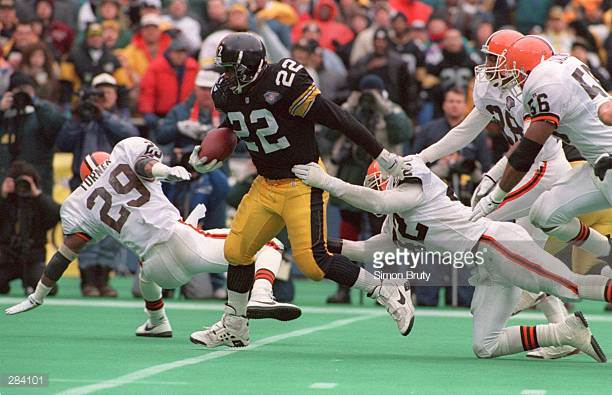 Bringing you another Pittsburgh Steelers’ interview courtesy of our good friend Ron Lippock of the Pittsburgh Sports Daily Bulletin. Today, Ron checks in with John L. Williams, the Steelers fullback in the mid-90s. They discuss his transition to fullback, playing for Bill Cowher, and how Greg Lloyd was a mentor to him.

First, can you let readers know what you’ve been doing with yourself since your time in the NFL?

Just now, for the last year or so, i started the John L. Williams Foundation. Just got it off the ground and working on it now.

Basically, I’m working to help those in nursing homes, and it’s hard. Most of them are elderly in their ending stages. It’s harder to go in and be there. I had older parents who passed away and were in a nursing home. So I see the need. And it’s not just helping elderly in homes. It’s also about helping them in the community and working with groups like Habitat for Humanity.

How did you start that post-NFL career path?

Well, when I left the NFL I started a funeral home and a night club business.

That’s quite a mix!

Ha! It is yes! The funeral home I started with a long-standing childhood friend. That is still up and running. After that I opened up a night club, I did that for eight-to-ten years too. I wasn’t hands-on for the funeral home really. Just there some of the time.

It was a very hard adjustment. I got away from what I was used to doing every day. I played football since I was in high school. All of my friends for those ten years I lost. Now they’re gone. Those adjustment were hard, but I had my family so it wasn’t as hard. And the money was not the same as the guys today. We adjusted to what we had, like the guys today will have to do.

Looking back at your NFL career, you were a first round pick as a fullback and carved a very successful, unique career for ourself. Now, how does that happen?

When I came out of high school I had played in a wishbone offense. I was the right halfback. When I went to the University of Florida Shanahan was there and he ran a fullback-halfback offense. An I-back set. I went to Florida to be a running back not a fullback. But they had four guys who were NFL guys in the backfield. James Jones was the third fullback taken in the draft the following year. I was supposed to play tailback and start as a freshman but got hurt in practice. So Neal Anderson started for me – another first round back – and he ran for two-hundred or more yards his first game.

I still wasn’t 100% for the next game so Neal got another shot and ran for two-hundred plus yards again. When I got better coach said that I had to be behind Neal or go to fullback. Jones was a senior at fullback so I knew I would get to step in for him and I knew Neal wouldn’t adjust to playing fullback. I didn’t want to alternate with Neal and Lorenzo Hampton, another guy on the team who ended up being a first round pick.

So once you get to the NFL, you stay at fullback…

Once I was in the league I was more of a running back. If I didn’t hurt my hamstring you would never have heard of Emmitt Smith. My first years in the league I had the same numbers as Thurman Thomas. That’s why I went to the Pro Bowl. But I had to do so as a fullback. I always look back and wonder, if they allowed fullbacks to go to the Pro Bowl then like they did running backs, I would have gone eight times.

Now, I argue with people. I would have gone to the Hall of Fame as a fullback if I had gone to eight Pro Bowls. My numbers stand out and were better than Terrell Davis’,  but I didn’t have a championship like he did. I was a fullback though, and I didn’t win a championship.

After eight years in Seattle, you signed with Pittsburgh as a free agent. Why Pittsburgh?

They had Barry Foster then and needed someone to come out of the backfield and block. I played the Steelers often when I was in Seattle and they were always a tough team. When I had the opportunity to be a free agent I picked the Steelers because of their experience and chance to get the Super Bowl. I just wanted a shot at winning.

Did anyone sell you/talk to you from Pittsburgh to help sway you?

I talked to Tom Donohoe, the GM then. I was talking to him forever. He was telling me that when the time came to move on to let him know. I was recruited by many teams but I knew Pittsburgh wanted me for real. And I wanted also to play for a city where I could take a plane and fly back home to Florida in an hour-and-a-half.

Who helped introduce you to the city/team when you got there?

You’ll be surprised. Greg Lloyd took me in. We played against each other for all of those years and were in the Pro Bowl together a couple of times and got to know each other then. I didn’t go out a lot – wasn’t into the street life. But he coached me on the city and where to go.

What are some of the most interesting/funny memories you have of your time in Pittsburgh?

The weirdest thing was that we had to walk to practice from the stadium to the practice field across the highway. It felt like it was a mile away and we couldn’t use a bicycle. It was the craziest thing. When we got there we were already tired!

Greg – he was a prankster guy. When I first met him he was outside in pads. But when I saw him in the locker room I thought he was the Incredible Hulk. He was the most muscular guy I had ever seen.

Who were some of the toughest guys you faced against?

Greg was the toughest one. Kevin Greene was one the easiest guys I had to block. Just for some reason I understood how to block him. I watched film and knew his tendencies. I just had him down pat. I played him when we played the Rams and blocked him a lot.

How was Coach Cowher to play for?

Cowher was a good coach. He played the game. He understood the game and players. He knew what players went through. That they had life outside of football. That made a big difference.

Seeing how the game is being played today, what are your thoughts on the rule changes?

I like it. They are protecting themselves more. We didn’t care back then how hard you hit or got hit. But now it’s safer and players are protected. It is needed. The CTE and concussion stuff…it’s real…

Any last thoughts for players entering the game today?

Learn the techniques of blocking. If you do you can get away from injury issues more often. Learn that and how to tackle and it will go a long way to players staying healthy.