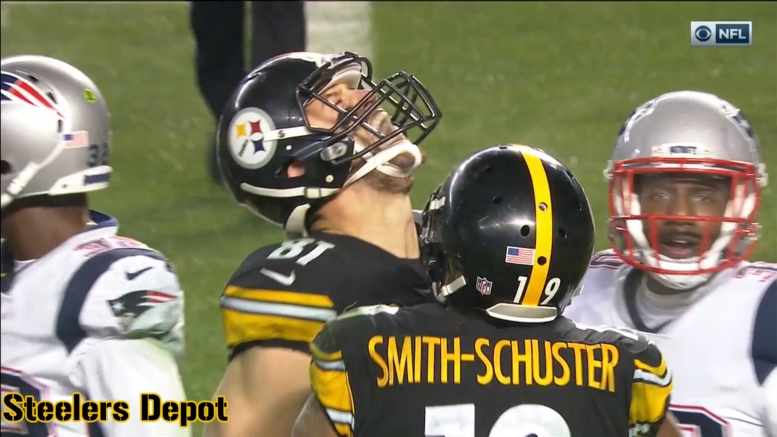 What is a catch? More importantly, what isn’t?

The Competition Committee is striving to come up with a better answer to this question in advance of the 2018 season, and head of officiating Al Riveron just shared the proposal that the committee intends to put forth in front of the owners at this weekend’s Annual League Meeting.

Riveron, who inherited his post from Dean Blandino, took center stage in the review process in a highly controversial way after making a number of review calls in the inaugural season in which the final decision on review calls was moved up into the head office, rather than down on the field.

After much deliberation & input from coaches, players, @NFLLegends, & club executives, the @NFL Competition Committee will recommend the following language simplifying the catch rule at the Annual Meeting next week. pic.twitter.com/hJwH5YYBRK

The idea here is to reduce the catch process to three steps. Step one: control of the football. Step two: two feet or another body part down. Step three: a third step, reaching/extending for the line-to-gain, or the ability to do so.

Basically, it’s a rewording and simplification of the general idea. Reaching/extending is the new ‘football move’ in more basic and concrete terms. How this all ends up working out in practice remains to be seen. Of course, it first has to be approved by two thirds of the owners.

Riveron specifically stated (in a derivation of a Tweet that has been deleted and reposted with new wording a couple of times now) that the new rule proposal would allow plays such as the Dez Bryant and Jesse James non-catches to now be regarded as catches, which has to be a step in the right direction, but, again, it all comes down to implementation and human judgement.

.@NFL Competition Committee proposal noted in the previous tweet simplifies the catch process & allows for plays such as the @DezBryant (2014 post-season) and @JJames18_ (2017 season) to become catches. pic.twitter.com/K2caIndpGZ

Noticeably absent is any wording about going to the ground, which was a major source of controversy, not just with the James catch a year ago for the Pittsburgh Steelers, but in a number of other high-profile catches that turned out not to be over the course of the past few years.

It has previously been reported that the Competition Committee is making the determination that slight movement of the football, even upon review, will no longer be regarded as adequate to negate the ruling of a catch.

Troy Vincent, the executive vice president of football operations, recently spoke to the Washington Post regarding the elimination of going to the ground and slight movements. Even more importantly, he said that “we’ll go back to the old replay standard of reverse the call on the field only when it’s indisputable”.

While there has never been a ‘new standard’ in the written language, it has become quite clear that the league departed from the ‘indisputable’ benchmark for overturning calls on the field. This more than anything will likely have an impact on determining in hindsight what is and is not a catch.