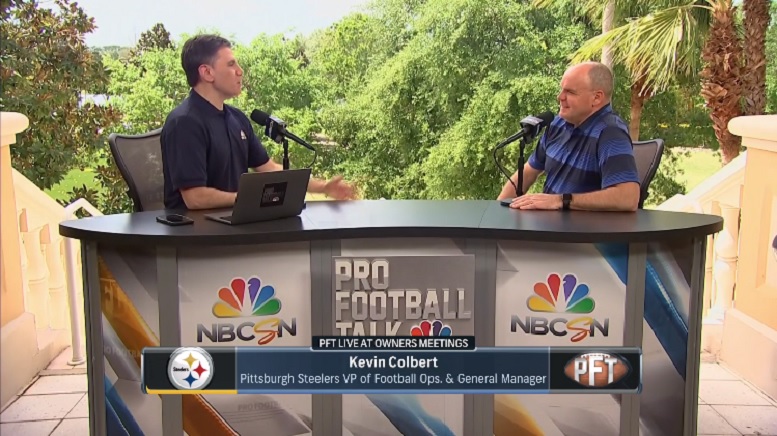 There’s been a little bit of talk so far this offseason about the Pittsburgh Steelers potentially signing quarterback Ben Roethlisberger to a contract extension prior to the start of the 2018 regular season and especially since he indicated a few months ago that he hopes to possibly play at least three more seasons. So far, such a contract extension has yet to happen and now that team has presumably already paid Roethlisberger the $5 million roster bonus he was reportedly due just after the start of the new league year earlier this month, the general consensus now seems to be that the quarterback’s contract will be put on the back burner until next offseason.

Earlier this week, Steelers general manager Kevin Colbert was interviewed by Mike Florio on PFT Live while at the annual league meetings in Florida and he was asked about a possible contract extension for Roethlisberger this offseason and specifically, if he feels any urgency to get something done with the quarterback before Green Bay Packers quarterback Aaron Rodgers, or somebody else, crosses over the $30 million per season threshold.

“No, I mean really, markets are markets and we’ll recognize that at the appropriate time, but the appropriate time right now is not dealing with Ben and I can’t say when that will occur,” Colbert said. “But right now, we have to take care of some more immediate-type business and we’re pretty much through the free agency period. Let’s get through the draft, see where we stand. Again, his values have been determined by him. Of course you recognize the market, but Ben’s a great quarterback. He’s going to be a Hall of Fame quarterback and again, as long as we can have him and he still wants to play, then it’s our job to make that happen.”

That’s a pretty straightforward answer by Colbert and really, not all that revealing. With that said, please allow me to attempt to parse Colbert’s comments while having my tin foil hat buckled tightly on my head.

For starters, even though Roethlisberger has apparently already been paid his $5 million roster bonus this offseason, the Steelers still could sign him to contract extension prior to the start of 2018 regular season if they want to. On top of that, Roethlisberger is still under contract through the 2019 season and thus there’s no real perceived urgency right now to sign him to another long-term contract this offseason even though the proverbial franchise quarterback market meter could go over the $30 million per season threshold by this same time next year.

Is it possible that the Steelers might be waiting to see how this year’s draft plays out before deciding if they want to sign Roethlisberger to a contract extension prior to the start of the 2018 regular season? I suppose that’s possible, right? After all, Colbert and company are doing their collective bests to at least give the appearance that they’re open to drafting a quarterback in the early rounds this year that could potentially be Roethlisberger’s heir apparent. Is that all just a smokescreen and part of the organization just doing their now-annual due diligence as a practice run for future drafts? We’ll find out for sure in less than a month.

Even if the Steelers do ultimately draft a quarterback early this year, Roethlisberger can still play at least three more seasons should he want to and be able to. While he is still technically under contract just two more seasons, the Steelers could obviously place the franchise tag on the quarterback ahead of the start of the 2020 new league year if he hasn’t already signed an extension by then. Sure, that franchise tag number by 2020 figures to be pushing $30 million, but he might very well still be worth it come that time. Remember, Roethlisberger is currently set to earn just $34 million in total over the course of the next two seasons.

“In terms of the contract, we’ll address that at the right time,” Steelers team president Art Rooney II said back in early February when asked if the team had plans to sign Roethlisberger to a contract extension this offseason.

The fact that the Steelers have yet to come right out this offseason and say that Roethlisberger will or won’t get a contract extension this offseason is a bit confusing to me. Could this perhaps mean they’re actually waiting to see how the draft ultimately plays out? I think that might be a plausible reason.

Should the Steelers ultimately not draft a quarterback in the early rounds this year and they ultimately sign Roethlisberger to a contract extension not long after the annual event ends, then perhaps we can then conclude that they were indeed entertaining the thought of selecting his heir apparent this year. Colbert saying, “Let’s get through the draft, see where we stand,” could wind up being a key part of his answer to Florio. We’ll see soon enough.

I will now remove my tin foil hat so that I can read your comments below this post.