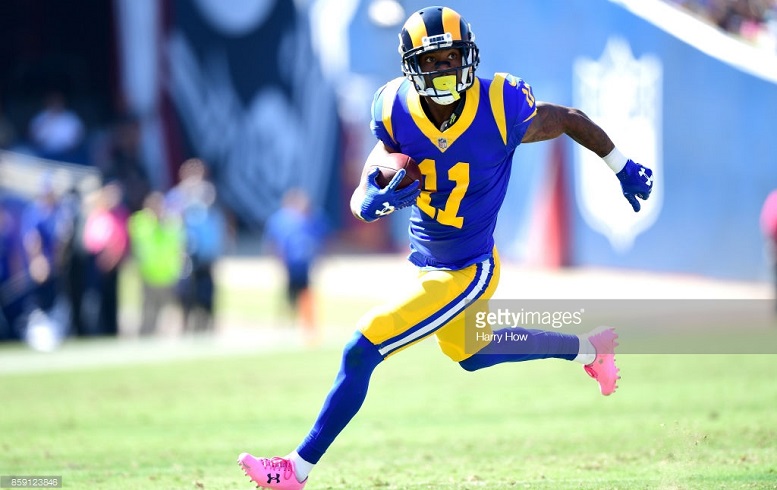 On Friday a rumor/report surfaced on the internet from Kevin Kinkead of the site Crossing Broad, a Philadelphia Eagles fan blog, stating that current Los Angeles Rams wide receiver Tavon Austin has had contact with four teams of which the Pittsburgh Steelers were one of them. The report/rumor goes on to say that Austin would prefer to sign with the Houston Texans but also that he has interest in playing for the Eagles. We chose not to post about this report/rumor because it came from an obscure source and has yet to be substantiated by a more-trusted outlet. However, because of the questions I have received about the report in the last 24 hours, I figured I should at least dive deeper into what I view to be only a rumor, at best.

For starters, Austin does indeed appear to be destined to become a former member of the Rams very soon. The diminutive wide receiver out of West Virginia who was drafted by the Rams in the first round of the 2013 NFL Draft is due a base salary of $3 million in 2018 that becomes fully guaranteed on March 16 if he’s still on the Los Angeles roster come that time, according to Pro Football Talk. Additionally, Austin is due a $5 million roster bonus on that same date that is already fully guaranteed.

Now, Austin’s contract reportedly includes offsets for that $5 million roster bonus. In other words, if he were to be cut by the Rams prior to March 16 and sign with another team for less than $5 million, the Rams would have to make up the rest. The Rams, however, would at least save the $3 million that Austin is due in base salary in 2018.

As for the report/rumor insinuating that Austin has already had contact with other teams, I find it a bit suspicious because of the NFL tampering rules. Even if the Rams gave Austin’s agent permission to seek a trade, supposed interested teams would still need to talk to the Rams about compensation for the wide receiver.

Personally, I just can’t see the Steelers being interested in trading for Austin because of the $3 million base salary he is due. On top of that, any team that might be interested in taking on that $3 million base salary in 2018, and the rest of his current contract that runs through the 2021 season, surely would want the Rams to eat the entire $5 million guaranteed roster bonus the wide receiver is due on March 16. As I already mentioned, the Rams would presumably get out cheaper by releasing Austin outright in the coming days and letting the offset language in his contract run its course and hope that another team overpays for him. Sure, they wouldn’t get any draft pick compensation, but let’s face it, no team is going to give them more than a seventh-round pick for him.

The fact that the Steelers would even be interested in paying Austin $3 million in 2018 to potentially be, at best, their No. 4 wide receiver and return man is a bit over the top. After all, the Steelers are already crunched for salary cap space in 2018 as it is. In short, I will be shocked if any team trades for Austin because of his current contract.

So, what if Austin is ultimately released in a few days by the Rams? Would and should the Steelers be interested in signing him at that point? While probably not an unthinkable notion due to the Steelers history of being attracted to former first and second round draft picks who have been given up on by the teams that originally selected them, it still comes down to money first and foremost. When and if Austin does hit the unemployment line in the coming days, he is sure to have a few suitors and thus can probably count on earning more than the minimum in 2018 for his vested years. A multi-year contract for Austin would also likely require a signing bonus of some sort as well.

Austin is not an every-down wide receiver in the NFL and the fact that Rams head coach Sean McVay, who is now considered one of the most-creative young offensive minds in the NFL, only managed to get Austin on the field for only 21.9% of all offensive snaps in 2017 is certainly a red flag if I’ve ever seen one. Instead, Austin is more of gimmick player who can line up anywhere on the field. With that said, and while he has averaged 7.7 yards per touch in his first five NFL seasons, he’s also fumbled 21 times in regular season games. He’s also only averaged 2.6 receptions a game for his entire career for a whopping 22.5 yards per game. His catch percentage is a mere 59.1%, which is just slightly higher that that of current Steelers wide receiver Martavis Bryant (56.3%). Oh, and Austin’s career deep pass completion percentage in the NFL is just 22.4% on 49 total targets. At least Bryant’s lowish percentage can be blamed some on the fact that he’s targeted more than 15 yards down the field quite a bit.

Austin’s best asset to a new NFL team would probably be his kickoff and punt return abilities but you must be aware of the fact that he’s only returned 25 total kickoffs so far during his first five seasons in the NFL for an average of 18 yards per and zero touchdowns. His longest kickoff return is also only 32 yards. In short, he’s a better punt returner than he is a kickoff returner and at 5-8, 179-pounds, that’s where his special teams value begins and ends.

If Austin is ultimately cut by the Rams and wants to sign with the Steelers for near or at the league minimum, I’m all for it as the team wouldn’t have much invested in him to see if he could compete for a roster spot, which I seriously doubt he would win. Personally, I just can’t see that happening, however, and quite honestly, I do not believe the recent report/rumor about the Steelers having contact with him recently. Regardless, we don’t have very long to wait until we find out if Austin will be jettisoned by the Rams and if the Steelers quickly have interest in signing him. What say you?