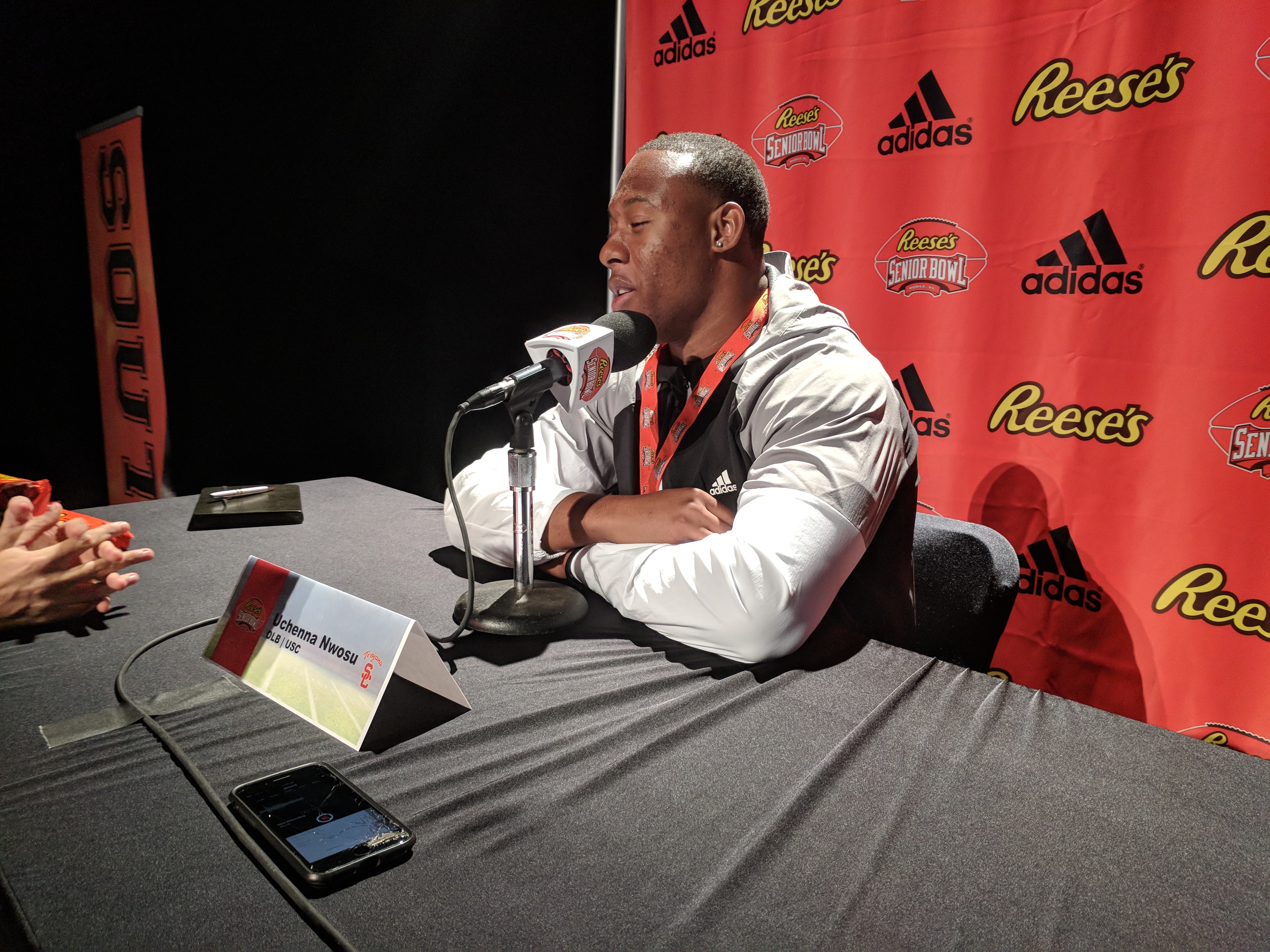 –Issues getting away from blockers
–Does not hold up well setting edge
–Limited to bull rush, needs other moves
–Effort is all over the place
–Lacks instincts

Lined up in a two point stance across from the tight end, Nwosu bumps the receiver going out on their route. Noticing the QB has his arm cocked to throw, #42 times his jump getting his arms up to deflect the pigskin to the ground. This shows off his explosive lower body and nice reading of the signal caller’s eyes.

Nwosu lines up in a goal line situation in his two point stance between the right guard and tackle on the strongside of the formation. At the snap, the backer takes an inside move and gets mauled by the tackle who knocks him off his feet. Most of the defense continues to follow the back, but Buckeye QB JT Barrett scrambles right for the score. It took less than a second to plow the OLB away from the hole, so his ability to hold an edge is very much in doubt.

Lined up as an overhang backer, #42 screams across the line of scrimmage at the snap taking an outside path. He does not fall for the fake handoff, then slips past the back trying to block him. Nwosu squares up his prey and swallows the quarterback up for a big sack. I like the way this play demonstrates his stop/start feet and the burst to smash the quarterback in the pocket!

#42 lines up in the gap just past the right tackle in a second and 10 situation. He steps across the line when the receiver goes in motion past him. Sensing a misdirection, Nwosu ducks above the pulling wingback and goes down the line of scrimmage to wrap-up tackle the back for a short gain. It was his quickness that put him in position to make the tackle, forcing a third and long.

On a third and 10, the backer lines up between the center and guard attempting to look like he was on a blitz, but drops back on the snap. #42 watches the QB and tracks the ball, knocking it further up in the air. This allows an Arizona State receiver to snare the ball for a first down in the red zone. Nwosu was focusing on the glory and got clumsy with the pigskin allowing a sure interception turn into a scoring opportunity for the opponent.

Nwosu is an interesting prospect that has some good athleticism, but his instincts are quite lacking. With his draft stock rising from the third or fourth round to the late first/early second, the backer is probably out of the Steelers price range. He gets mauled on the edge too much for an 3-4 OLB and does not have enough pass rush moves to get to the quarterback consistently. The backer rarely dropped back into pass coverage and his effort on plays went from impressive to lackluster from quarter to quarter. If Nwosu is somehow available in the fourth, I would hope Pittsburgh drafts him, but chances are that he will go much earlier now.