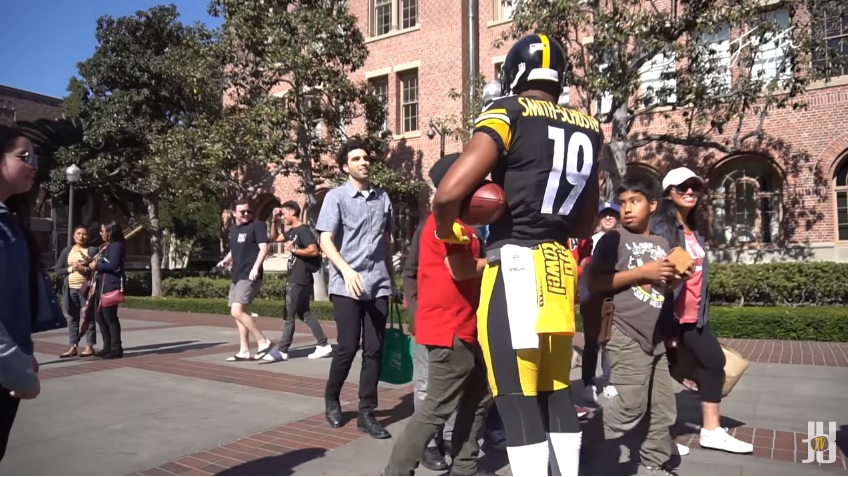 JuJu Smith-Schuster has quickly made himself a household name in the NFL. But for this offseason, he’s heading back to school.

In his typical easy-going, pranking style (along with a Youtube channel putting up some seriously good numbers), he posted this video yesterday of one day back at USC.

The video shows him in class and around campus. Going one-on-one with students, taking notes, and seeing last year’s Spanish teacher.

At the risk of going all Darren Rovell on you, JuJu has quickly created a major brand for himself. He’s closing in on 500,000 Twitter followers and his Youtube channel, which houses JuJu TV, is up over 200,000 subscribers. A typical video can hit over 100,000 views. Who knows how much money he’s making off of all that, I assume a lot, and maybe closing in on as much as he did in the NFL (he made $465,000 last year – that’s before taxes and fees).

He wouldn’t be the first player to supplement his income with off the field work. Before the Super Bowl, Rob Gronkowski said he hasn’t spent a dime of the money he’s earned in the NFL; it’s all been from his endorsements. You have to think that in the near future, you’re going to see JuJu show up in commercials and do more advertising/promotion.

It’s hard to think of any Steelers’ rookie who has made a bigger name for himself on and off the field in recent history than him. I don’t know if he is being serious when he says he’s going back to school but props to him if he is to finish out his degree. For however successful of an NFL career he might have, life’s work will be waiting for him soon enough.

As long as he has people to keep him grounded, and if his mom is any indication, he does, he’ll continue to be a fan-favorite around the NFL.