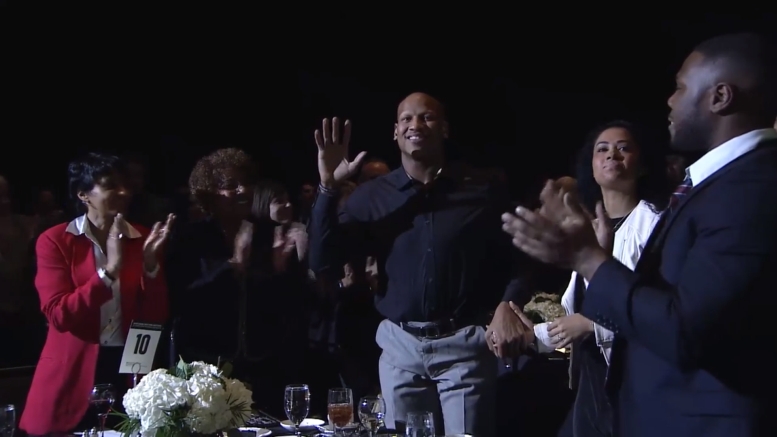 They were far from the only Steelers presence there, however, and perhaps both of them were outshined by one other appearance: linebacker Ryan Shazier, who according to the Pittsburgh Post-Gazette was acknowledged by the audience, and then stood up from his wheelchair to greet those gathered, receiving “booming applause”.

This is the second time that Shazier has appeared in public and stood since he suffered a severe spinal injury in early December while facing the Cincinnati Bengals. Earlier this month, he was at a Pittsburgh Penguins game and shocked the crowd by standing.

Recently, during an interview with teammate Roosevelt Nix on the fullback’s podcast, he said that he felt that he needed to do that in order to show everybody where he is. He mentioned that a photo that went around showing him with quarterback Ben Roethlisberger was deceptive in that it appeared that his teammate was holding him up.

One can wonder if his decision to make a public demonstration was not also inspired by an Adam Schefter report that sought to update his progress during rehabilitation but which caused enough confusion that Shazier field it necessary to offer a clarification through another media personality, distinguishing a “walking routine” from actually walking unassisted.

It was Colbert who recognized Shazier during his acceptance speech for his Leadership Award. “As you all know, Ryan suffered a very serious injury”, he said, “and he faces a huge challenge right now. But from the moment he was injured and we took him off the field, Coach [Mike] Tomlin and I visited him that night in the hospital.

“Never has he once said, ‘why me?’”, Colbert continued. All he said, and he said it again [on Nix’s podcast], he said ‘I can’t wait to get back’. He can’t wait to get back to the game that he loves so much” the Steelers’ general manager that he wanted to accept the award in the name of both Shazier and the late Dan Rooney.

You can watch a video of Colbert’s speech and see Shazier stand up, actually not once, but twice. It’s almost hard to fathom how far he has already come in little more than two months.

As I have said in every article that I have written broaching on the subject, Shazier has not just the Steelers, but the city of Pittsburgh, and all of the Steelers fandom diaspora, behind him. He knows that quite well and he expressed vast appreciation for all the support he has received during his interview with Nix.