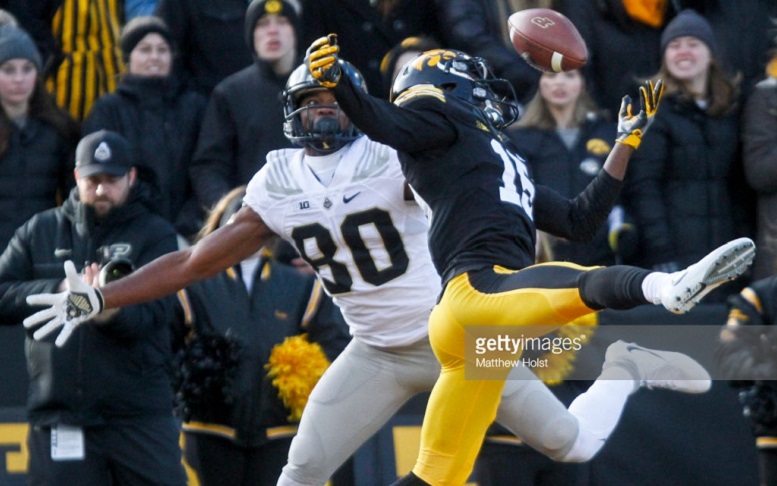 The 2017 NFL season officially came to an end on Sunday with Super Bowl LII and on Tuesday, ESPN draft analyst Todd McShay figured it was a perfect time to release his second mock draft of 2018. McShay, who mocked South Dakota State tight end Dallas Goedert to the Pittsburgh Steelers in the first-round in his mid December offering, now has the Black and Gold selecting Iowa cornerback Josh Jackson with the 28th overall pick in his second version.

The Steelers still can use help on the outside, even after using a first-round pick on a CB in 2016 (Artie Burns). Jackson is a long corner and an absolute ball hawk who led the nation with eight INTs. His timed speed at the combine will play a big role in where he gets drafted.

Ahead of this year’s scouting combine taking place, Jackson, who declared for the 2018 NFL Draft as an underclassman several weeks ago, reportedly measures in at 6012, 192-pounds. After not being heavily recruited coming out of high school, Jackson ultimately landed at Iowa and according to reports, he was briefly switched to wide receiver from cornerback after his 2014 red shirt season before being quickly moved back to the defensive side of the football.

While Jackson is expected to test very well at this year’s scouting combine, several people are apparently already interested to see if he can run the 40-yard-dash in less than 4.5 seconds. If he does, he’ll probably become a lock to be drafted somewhere in the first round. If he doesn’t, then I’m sure several draft analysts might then view him as a potential early-day-two prospect.

As far as the Steelers go, it would be a bit surprising to see them ultimately select a cornerback in the first-round of this year’s draft due to the fact that already have two starters in Artie Burns and Joe Haden in addition to drafting two cornerbacks last year in Cameron Sutton and Brian Allen. If that’s not enough reason to think that the Steelers won’t go cornerback in the first-round of this year’s draft, the fact that the team really needs to address the inside linebacker and safety positions early is yet more reasons as to why they likely won’t. Regardless, Jackson will certainly be a player to pay close attention to later this month when the scouting combine gets underway in Indianapolis, IN.

We’ll have a full breakdown and draft profile of Jackson for you in the coming weeks so be on the lookout for that. In the meantime, however, below are some videos of Jackson’s play against Ohio State and Wisconsin this past season.