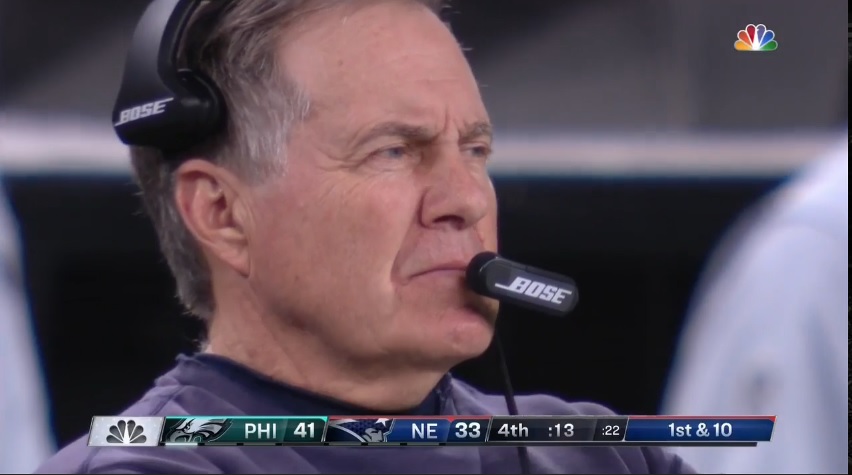 Bill Belichick is the greatest coach of this era. Arguably, the best of all-time. Even last night’s loss doesn’t change that fact. But what Sunday proved is that even Belichick, the GOAT, isn’t above screwing it all up.

You could make an unusually long list for him. It starts with his curious usage of cornerback Malcolm Butler, who hadn’t enjoyed as good a year as in the past but was a fixture on that Patriots’ defense. Last night, he played zero snaps defensively, Belichick deferring to Eric Rowe and Jonathan Bademosi, both torched repeatedly.

After the game, Belichick offered little answer as to why he made the change he did, only defending himself by saying he was playing those who offered the best chance to win. Butler was pissed, which you’d expect, but even Rowe was confused, which I didn’t expect.

Eric Rowe said he didn't know he was starting until right before game. Seemed as puzzled as rest of NE as to why no Malcolm Butler

Butler, as Rowe told it, had been the starter the entire week of practice. Butler was sick throughout the week and arrived later than the rest of the team but that still didn’t prevent him from running with the 1’s during the week. Come kickoff? The script flipped.

Maybe Belichick had his reasons. Maybe those reasons were valid. But without explaining them, he’s open – and deserving – of criticism.

There were other more minor head-scratchers too. The failed kick return reverse on the final drive is also near the top. If it’s any other coach, that play gets lambasted by all who watched. But it’s Belichick so it’s given more of a pass.

Beyond that, it’s clear the Eagles out-coached and out-schemed the Patriots. Doug Pederson was masterful, being aggressive when almost no other coach would, busting out a TE pass to the QB on 4th down, a decision so insane you could only conceive of it on Madden 18 until last night.

Rob Gronkowski got shut down for a half and when the Eagles had to bottle him up late, they did. Philadelphia attacked New England with vertical concepts, switch routes, slot fades, and wheels that got their receivers open time and time again. The game-winning touchdown was another brilliant playcall, using motion to isolate Zach Ertz and let him win on the slant.

Brilliant design by Pederson. Safety to that side was going to double Ertz. Patriots were going to cover the RB with a DE peel. But when the Eagles fast motioned the RB into 4×1, safety had to match the RB, leaving the CB 1v1 late. Forced to make a quick adjustment. https://t.co/tOBWr0pAf5

Last night, it was Pederson > Belichick. And Philadelphia > New England.

All of this is to serve as a reminder that even the great coaches can sometimes get it wrong. Or at least, it appears that way.

I don’t mean to be *that guy* but if that was Mike Tomlin – or anyone other coach, for that matter – he would’ve been reamed. Just as he was when his defense gave up 45 to the Jacksonville Jaguars. Sunday, it was the Eagles putting up 41 on the Pats. An offense that was probably more potent, sure, but still one without their franchise QB, starting left tackle, and the loss of one of their better running backs.

To the larger point, when there’s the discussion about firing Tomlin, the claim by many after the Jaguars’ loss, the “then what?” part is missed. Fire Tomlin. Then what? Who replaces him? Belichick showed he is mortal last night. To err is human, as the saying goes. Odds are, the next guy is going to make some of those same mistakes.

Let’s get the counter argument out of the way, too. This doesn’t excuse the errors Tomlin has made either. Doesn’t absolve him from the blame of an early playoff exit. And to criticize him is fair and valid – heck, we did the same. But I’m just saying…he ain’t the only one.

That comes with the territory. Like players, coaches will mess up. Like us trying to infer anything, we don’t have the inside access. That makes judging a coach even more difficult than a player.

Tomlin, Belichick, all coaches are going to be held to the highest of standards. As they should be; after all, they’re the leaders. As they go, so does the team. But if last night proved anything, even the best in the world can be defeated.