Most of us are turning the page onto the Pittsburgh Steelers 2018 season. A 2017 campaign that ended on a sour note, an early exit to the Jacksonville Jaguars. But some players continue to use that loss as fuel to turn things around. That includes long snapper Kameron Canaday, who sent out this screenshot of the Jags/Steelers game on the TV of wherever he was working out at, captioned by the word “gym motivation.” 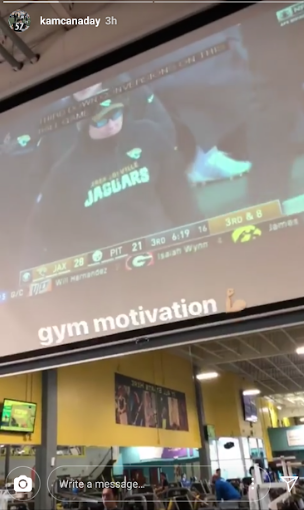 Of course, it’s not like Canaday did anything to cost the Steelers of a playoff victory. After beating out draft pick Colin Holba, who, funny enough, was the Jaguars’ starter in the rematch, Canaday had a strong season. Which is to say, a quiet one, without any obvious bad snaps like the ones that got him cut in Arizona two years ago. While jobs job may be comfortable right now, one bad camp can reverse that story so he’s far from established and “safe” the way Greg Warren was.

I suspect Canaday isn’t the only one using that loss as fuel. With some time off, most players are getting into their offseason workout routines. We wrote about Xavier Grimble and Martavis Bryant linking up a couple weeks ago. Grimble continues to post clips of some grueling workout sessions with Bryant as those two look to make a bigger impact in 2018 than they did last year.

The only concern is not getting hyper-focused on one team as the Steelers seemed to do with New England last year. As I’ve said anytime the Patriots come up, if you put all your focus on them, you won’t give yourself a chance to see them in a game that really counts. Ditto Jacksonville in 2018, who should remain in heavy playoff contention.

But to grind out the end of a gym session? By all means, use whatever motivation you need.