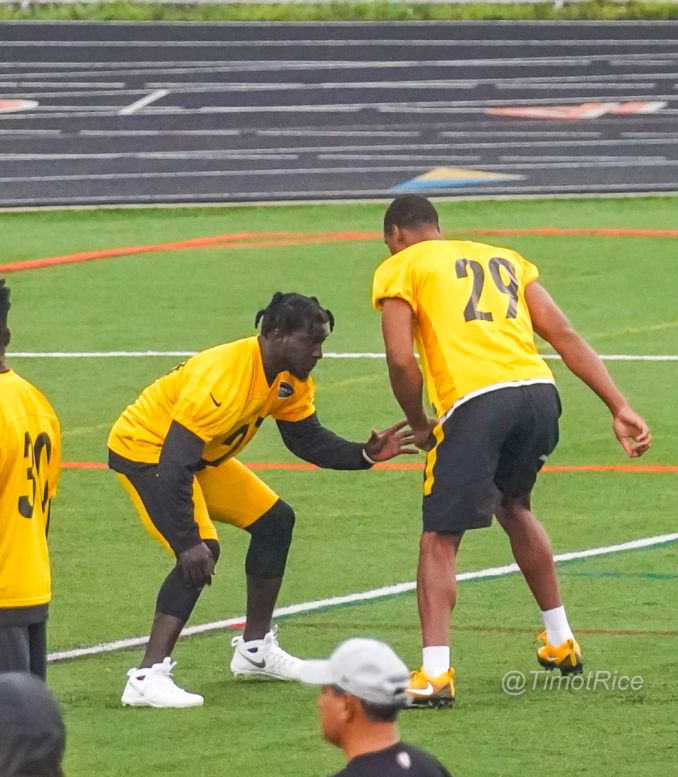 There’s a plan in place for most of the Pittsburgh Steelers’ secondary. Joe Haden, assuming he’s kept, is locked in as a starter. Artie Burns is supposed to be opposite but you can bet Cam Sutton will at least push him in training camp. Mike Hilton is locked into the slot. William Gay is probably on the outs and if he stays, a move to safety seems logical. Safety is status quo for now. Mike Mitchell could go but if he’s here, he’s playing free safety. Sean Davis at strong safety and Robert Golden wherever he’s needed.

The one guy I’m most unsure about is Brian Allen. Does he stay at corner? Or does the team look to move him to safety?

There’s nothing wrong with keeping Allen at corner. After all, that was the intention when he was drafted and how things played out last year. His performance in training camp wasn’t sparkling but he got better as it went on and showed some flashes in the preseason. Here’s what I wrote near the end of the summer.

“Allen got off to a difficult start, unsurprising for a raw rookie. While the physical tools were there, his technique was poor. No longer could he get away with his speed and length. At the start of camp, Allen was prone to getting out of phase at the top of routes, looking back for the ball and giving up space. But he seemed to turn things around in the win over the Giants, playing the ball perfectly on a nine route late in the game.”

But keeping him there is an admission he’s unlikely to play defense in his sophomore season. Sutton, or Burns, if he were to lose the job, would be the next man up. Allen would continue to play special teams, where he did a reasonably good job last year.

Or he could move to safety where there’s a chance for playing time. He’d move to free safety and if Mike Mitchell is cut, there’s a wide open spot in the secondary. The Steelers will bring in a high-priority player but still, Allen could compete, and is one injury away from potentially seeing playing time. Allen played both spots at Utah and after he was drafted, Keith Butler compared him to Davis, who moved to SS full-time last year. Throughout the process, the team seems non-committal to where they intend on keeping him.

Ultimately, there’s no wrong decision here. Every lineup needs excellent cornerback depth and if the team feels he has the tools to succeed at corner, right now, there’s no reason to think he can’t play well there, it’s fair for him to stay. 2018 could be Joe Haden’s last year and put Allen into a top backup role with two seasons under his belt, the experience a raw player like him needed.

Much of the same could be said about his track at safety, too, if after getting a long look at him at cornerback, they decide his skillset better translates to playing in more space. And who knows how new DB coach Tom Bradley will evaluate him. Among all the changes in the secondary, of which there will be several, don’t lose track of this one.