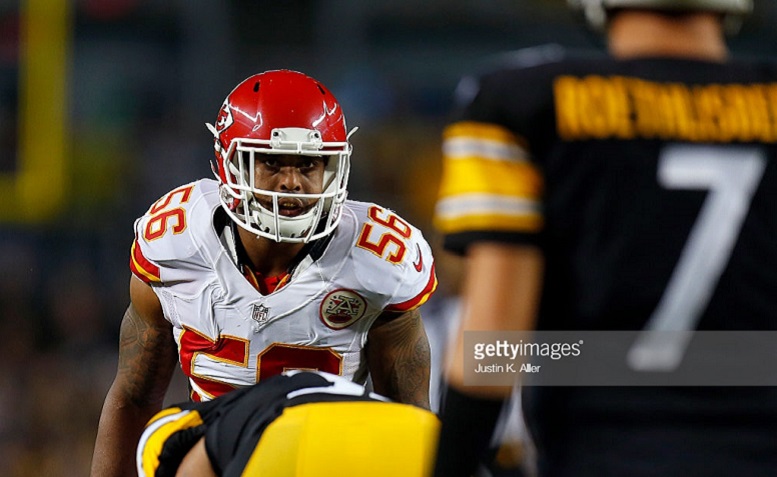 The Kansas City Chiefs announced on Tuesday that veteran inside linebacker Derrick Johnson will become an unrestricted free agent in March due to his contract voiding. Since that news broke, several fans of the Pittsburgh Steelers, as expected, have been suggesting that the team look to sign the 35-year-old inside linebacker in order to temporarily fill the shoes of injured starter Ryan Shazier. In all likelihood, such a transaction isn’t likely to happen and I’m certainly hoping that it doesn’t.

For starters, Steelers fans, both old and young, love to forget about history or how the franchise operates whenever a big name hits free agency. So with that, let me now take this time to remind all of you that the Steelers have only signed one defensive free agent that was 30 years or older dating back to 2000 that had never played for the organization previously. That player was linebacker Mike Jones, who the team signed back in 2001.

Johnson, in case you missed it, will turn 36 in November and has twice had to overcome Achilles tears. In total, he played nearly 77% of all defensive snaps for the Chiefs last season and certainly didn’t look like the player he once was just a few years ago. Father Time has finally caught up to Johnson.

Even if Johnson were willing to sign for the veteran league minimum and receive little to no signing bonus, the Steelers can find better ways to spend their money this offseason. In fact, former Steelers inside linebacker Lawrence Timmons would be a better option than Johnson at a minimum salary should the Miami Dolphins ultimately part ways with him in the coming weeks. Even that’s a stretch, however, as Timmons wouldn’t be much use to the Steelers outside of playing in the base defense as he certainly is no longer suited to play in nickel packages and his special teams days are long behind him as well.

With Shazier currently not expected to play in 2018, and maybe ultimately never again, the Steelers will likely look to draft another inside linebacker this year in the first two rounds. Additionally, and as I pointed out very recently, it won’t be surprising to see Steelers general manager Kevin Colbert attempt to sign a bargain free agent inside linebacker ahead of the draft taking place. With that said, such a free agent target is likely to be well under 30 years of age.

Johnson was a hell of a player during his prime years and a heckuva quality individual as well. The fact that he was able to play in the league as long as he has speaks volumes about him. All of that noted, here’s to hoping that he’s able to continue his NFL career in 2018 and with a team other than the Chiefs and the Steelers.