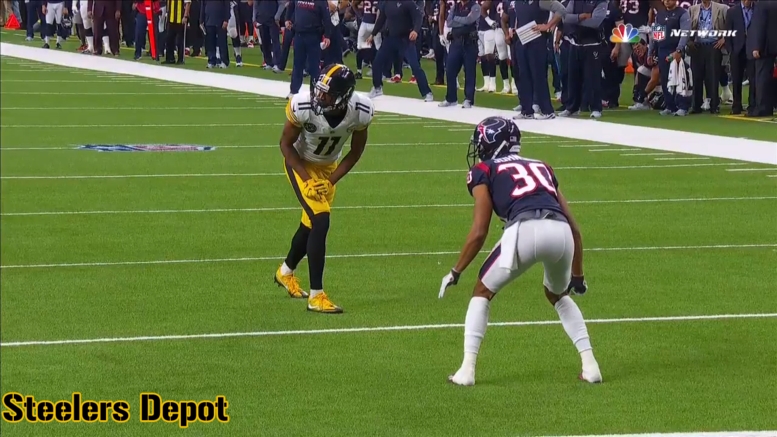 Justin Hunter did not exactly have a big 2017 season, but that was never expected of him. At least, I don’t imagine that is what was expected of him, though it’s worth noting that at the time he was signed, their number two through five wide receivers were Sammie Coates, Eli Rogers, Cobi Hamilton, and Demarcus Ayers.

As the offseason progressed and the Steelers saw their wide receiver coffers replenished, Hunter’s realistic chances of being a meaningful contributor diminished. There was even legitimate debate over whether or not he would make the 53-man roster over somebody like Coates or Ayers, though he did, the former traded and the latter spurning a spot on the practice squad.

Hunter got his first opportunity to be a contributor in Week Four, spending the first three weeks inactive. As Rogers was demoted for muffing a punt in the prior game, Hunter got a couple of games to serve as basically the number four wide receiver.

He only played about a dozen snaps between the two games, though, catching two passes for 11 yards combined. His next opportunity to play was in Week Eight when Martavis Bryant was benched. Though he played about 20 snaps, he only caught one pass for seven yards.

I believe it was in the second game against the Baltimore Ravens in Week 14 that Hunter had a golden opportunity to haul in his first touchdown reception with the team, but he failed to secure the ball in the end zone.

A couple of weeks after that, while getting playing time in Houston, due to injury in front of him, he finally did get that first touchdown. Ben Roethlisberger came to him as the last option, throwing him open in the back left corner of the end zone for the five-yard score. It was a bit sigh of relief for the veteran and the high point of his otherwise wasted season.

Will there be much of a market for Justin Hunter? It’s hard to say. Obviously he is not going to be head-hunted for a big-money, multi-year deal. But it’s not inconceivable that multiple teams might be looking at him as an option.

The Steelers last season signed him fairly early on in the process, albeit to just a one-year deal. He is still tall and fast, and his lack of playing time can be explained by playing behind a deep roster by his agent, while noting that the playing time he did get was somewhat productive.

Pittsburgh could even be one of the teams that pursue him. They may even re-sign him to another one-year qualifying contract prior to free agency. Remember, Eli Rogers may not be re-signed, and it’s possible that Darrius Heyward-Bey is released. As a fourth option behind Antonio Brown, JuJu Smith-Schuster, and Martavis Bryant, they could do worse.

Plus, he was originally signed as Bryant insurance, which, frankly, they still need.