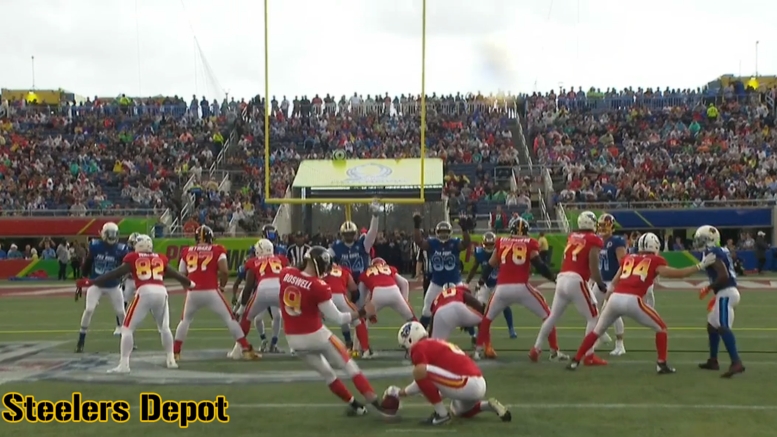 Chris Boswell had an excellent season for the Pittsburgh Steelers in 2017, as should go without saying when noting that he ended the year being voted into the Pro Bowl. Long story short, he was among the most accurate kickers in the league, was able to hit from distance, and was clutch. You really can’t ask for much more than that.

During his third season in the NFL, during which he played a full 16-game season for the first time, Boswell also set new team records for the most points scored in a single season and the most field goals made in a single season.

Overall, he hit 35 of 38 field goals for a 92.1-percent accuracy rating, and one of his three misses was blocked. He also had an extra point blocked. He hit at least four field goals in four different games, including going five-for-five against the Bengals, whom he loves to kick against.

Most important, and impressive, is the fact that he hit four game-winning field goals over a five-game span, one of them being from 53 yards out. To the best of my ability, I have not been able to identify any other season in which a kicker has hit more game-winners in one season.

Boswell is the last ‘major’ free agent left to cover, and though he is only a restricted free agent, I think it’s quite possible, and perhaps actually very likely, that the team will reach a long-term agreement with him, if not soon, then at least before the regular season starts.

One interesting aspect of the restricted tag consideration is that they almost assuredly would not be able to tag him at the original-round tender, given that he was undrafted. Boswell made the Pro Bowl in 2017, deservedly, so one has to wonder if even a second-round tender would be enough for team to stay away.

It’s one thing not to want to use a draft pick on an unproven college kicker, but when you have an opportunity to try to snatch away a Pro Bowl kicker who is in the prime of his career, don’t think that teams will not do just that.

There were reports last season already that the team wanted to get a long-term deal done, though it did not develop. Given how the 2017 season played out, I can’t imagine they don’t get it done this time. after all, they just signed another would-be restricted free agent, fullback Roosevelt Nix, to a long-term contract.

For those wondering, there are 10 kickers who currently have a contract that averages $3 million or more per season. Stephen Gostkowski, Justin Tucker, and Mason Crosby are the only three over $4 million, with $4.3 million being the ceiling.