Happy Friday to all of you and welcome to another offseason weekend.

While the 2018 Winter Olympics have been going on in full force this past week, I still cant bring myself to watch much of it. I have seen some of the hokey, men’s and women’s, however, as well as the men’s snowboarding finals, but that’s about it. That curling sport is boring as is the figure skating.

We were treated to Pittsburgh Steelers team president Art Rooney II and general manager Kevin Colbert both holding their end-of-the-season media sessions recently and thankfully that gave us a few things to talk about this week. Now we sit and wait to see what happens with running back Le’Veon Bell ahead of the annual combine getting underway in Indianapolis. That will likely be the next time that Colbert speaks. Fear not, the start of the 2018 league year is now less than four weeks away and that time should pass fairly quick with the combine sandwiched in there.

On Tuesday, I will travel back to Florida for a few days to check on my mother and help her with a few things she needs taken care of. I’ll be back in Las Vegas early Sunday morning so in the meantime Alex Kozora and Matthew Marczi will be handling things and in charge of keeping you entertained.

As usual, I have five questions below for yinz to answer on this Friday night and I look forward to seeing a lot of your answers in the comments.

1 – True or false: The Steelers will sign a free agent inside linebacker during the first three weeks of the new league year in March that averages $4 million or more per season.

2 – Along the same lines of the first question, please name one soon-to-be free agent inside linebacker that you would like to see the Steelers pursue.

3 – How would you go about getting Steelers cornerback Cameron Sutton on the field in 2018 assuming the team doesn’t part ways with fellow cornerback Joe Haden this offseason?

4 – Had you been sitting in the room with Steelers general manager Kevin Colbert on Thursday as a member of the local media, what one question would you have made sure to ask him?

5 – Of the 15 Steelers players below who have been signed to Reserve/Future contracts this offseason, name two that you are really looking forward to seeing compete for a roster spot once the practices get rolling again. 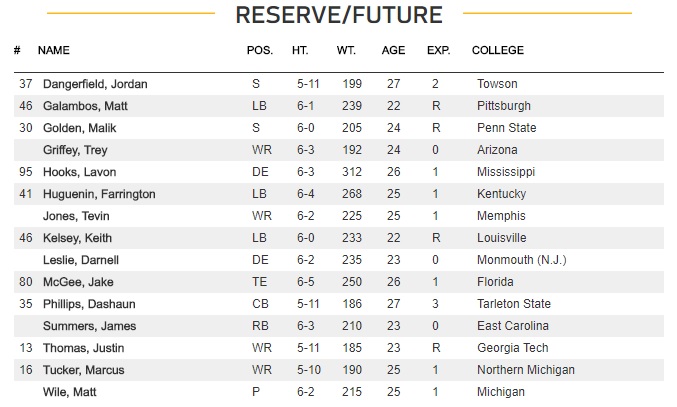 Question 1 – The median grade of the Super Bowl just played given by the 46 respondents to the first 2018 offseason Friday Night questions was an 8. The scores ranged from 1-9; with the lower scores citing the lack of defense. The higher scores noted the competitiveness of the game. I wonder if the grade would have been different if the Eagles had lost.

Question 2 – 64 % of respondents were more excited about Tom Bradley being hired as a defensive coach than Karl Dunbar who was favored by 23%. The remainder were not excited by either or simply could not choose between the two. The Bradley supporters cited the defensive backs as the group most in need of improvement. Dunbar’s like his hardnose “we teach, we demand” approach.

Question 3 – 59% of us would trade Nick Foles if we were running the Philadelphia Eagles. The prevailing thought was getting the most value for him as the Super Bowl MVP. His worth in a trade varied from two first round picks to as little as just one third round pick. Most wanted 2-3 picks. The minority opinion was not to trade him since it is still too early to determne how well Carson Wentz will bounce back from his injury.

Question 4 – Only 44 % believe Jimmy Garoppolo will win a Super Bowl before he retires.  While most acknowledge that he is talented; the difficulty of winning a Super Bowl and the competitiveness of the 49ers division makes us doubtful as a group.

Question 5 – We cited a lot of different lessons that could be learned from the Eagles this past season. A number of these lessons had already been discussed earlier in the season but some examples that you brought up were better game planning including the use of run-pass option plays. Being bolder on 3rd & 4th down plays (of course we just wanted quarterback sneaks on 4th & 1 in that last game). Several folks said that 2-3 good running backs is more effective than paying one great running back $15 million per year. Similarly, several folks felt that the Eagles proved that a group of solid players playing as a team was better than having several stars (the no I in team comments). There were also some that saw the use of analytics rather than intuitive play calling as the ticker for success.