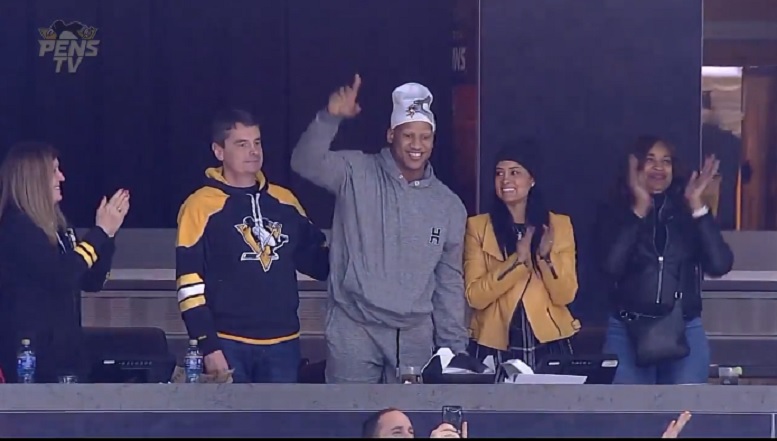 If you saw the Pittsburgh Penguins play the Las Vegas Golden Knights Tuesday night you were treated to seeing Pittsburgh Steelers linebacker Ryan Shazier stand and waive to the the sold out crowd at PPG Paints Arena after his presence was acknowledged via a public address announcement. On Wednesday, Steelers team president Art Rooney II was asked about Shazier and specifically what he anticipates the linebacker’s involvement with the team being next season.

“Ryan’s been an inspiration I think to everybody’s that he’s been around and the attitude that he’s at in terms of his rehabilitation,” Rooney said Wednesday on Steelers Live. “He’s just, like I said, he’s an inspiration. So, you know, he’s going to be part of the team one way or the other and he’s still working hard at his rehab. I don’t think anybody’s putting any ceiling on where he might go. But you know, I know he’ll be making a contribution to the team in 2018 in some fashion and we’re glad that he’s in the building on a regular basis now.”

Shazier, who is now beginning the third month of his rehab following him suffering a serious injury to his spine in the first quarter of the Steelers Week 13 Monday night road game against the Cincinnati Bengals, was finally released from the hospital this past Thursday. The University of Pittsburgh Medical Center indicated via short release at that time that Shazier will now transition to an outpatient therapy program.

On Super Bowl Sunday it was learned that while Shazier does now have movement in his legs, he is not yet walking on his own and thus needs assistance from a walker or other people when attempting to do so. This was somewhat evident Tuesday night as Shazier needed some assistance while attempting to stand in order to acknowledge and waive to crowd during the hockey game.

Shazier, who had his fifth-year option picked up by the Steelers last offseason, is now scheduled to earn $8.718 million in 2018. That money is fully guaranteed being as Shazier was seriously injured this past season.