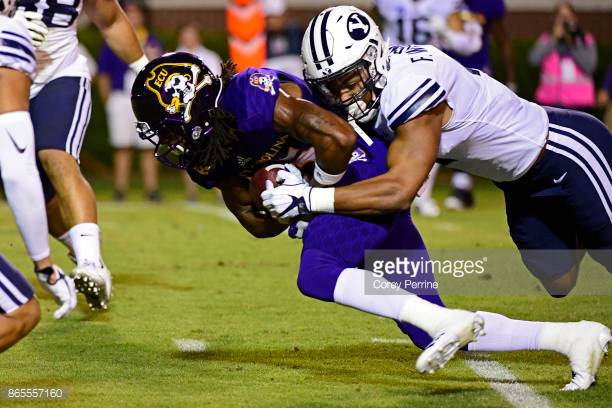 The Pittsburgh Steelers seem to meet with prospects late in the Senior Bowl week and generally, we don’t find out who those names are. But we can add one to the list. According to this article from BYU Wire, BYU linebacker Fred Warner said the Steelers were one of three teams he had a formal meeting with.

From the site, per Cougar Sports on ESPN Radio.

“I had formal interviews with some of the different teams GM’s and coaching staffs. Specially with the Saints, the Steelers, and the Raiders.”

While the Steelers coaching staff was in Orlando for the Pro Bowl, 10 scouts were in attendance along with GM Kevin Colbert, who likely met personally with Warner during the meeting.

Warner, a three year starter, racked up 87 tackles (9 for a loss), a sack, and an interception during his senior season while also being named a team captain. He had a strong week in Mobile, showing off impressive athleticism and separating himself from the other ILBs at the Senior Bowl.

There are concerns about his thin frame and ability to hold the point of attack against the run but he’s a high-upside, sideline-to-sideline player who would be a good fit as the Mack linebacker to replace Ryan Shazier.

Check out the recent scouting report our Josh Carney did on Warner. He came away impressed.